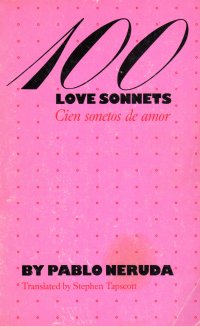 As you might know, gentle reader, I used to sit and read poems to my child and then children while they played. This book, along with Ogden Nash’s I’m A Stranger Here Myself, represent probably the last two I started to read with them before they were resigned to the nightstand book accumulation point. So this, aside from the unfinished legendary collection of Emily Dickinson that I started in 1994, might be the longest I’ll ever go between starting and finishing a book of poetry.

To be honest, in the middle 1990s, a girl I was dating got into Neruda probably because her film class studied Il Postino (the other The Postman). She borrowed a translation from the library, and as I was examining it, I showed off my Spanish-language chops by comparing the original Spanish on the left with the English on the right. One of the first poems I saw if not thefirst translated something along the lines of “no me hace nada con muerte” to “I ain’t got no truck with death.” I laughed out loud and guessed the year of the translation–I was correct: 1974. But the particular flavor of translation clung to Neruda.

Which is unfortunate. This book also presents the Spanish on the left, so I was able to track the translations a bit, and this one was pretty straightforward. I only found a couple of variations, where the syntax of lines was rearranged. It was made easier, no doubt, that these were not actually sonnets in the original Spanish with rhymes and all. Instead, they’re earthy fourteen line love poems written for Matilde Urrutia Cerda. The book includes a picture of a portly, older Neruda kissing the head of an older woman, and you think, Aw, that’s pretty sweet, until you learn that he wrote these poems for a woman who was his side piece for like a decade until she became his third wife, which definitely dulls the luster.

However, I wish I had written these poems for my beautiful wife. They’re earthy, concrete, and they flow pretty seamlessly from metaphor to metaphor but still hold together. The poems are chock full of carnations, wheat, and bread, and they contain some maturity in their tone and conceits. A nice change from most of the poems I generally read, and even from the classical poems I’ve been reviewing with my children.

Although I’m not sure how much I want to delve into Neruda’s other poems as he was a committed communist. These poems only lightly touch on that as he talks about those who oppose him in contrast with the lover, and certainly in contrast with the film which revels in his communism.

Still, worth a read. And, perhaps, in time, a re-read.