So Facebook, which thinks I like two things in the world (virtual athletic events and t-shirts), pushed this into my feed yesterday: 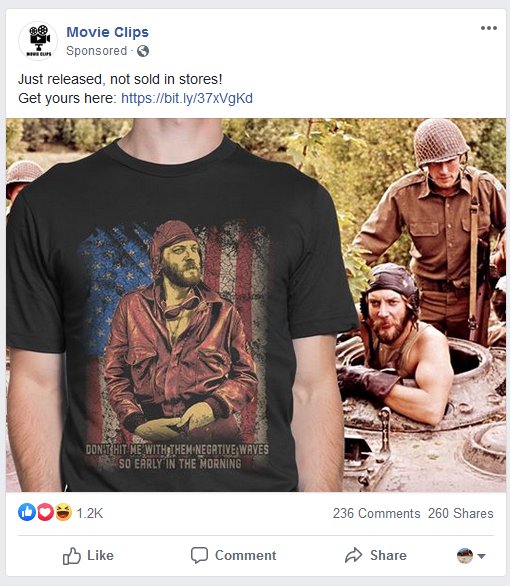 And I wouldn’t have known who that was except that I watched the Clint Eastwood movie Kelly’s Heroes in which the Donald Sutherland character Oddball (depicted on the shirt) appears. And I watched it, on DVD or videocassette in a device not connected to the Internet.

But I probably had my phone nearby….

At any rate, I did not buy this shirt. To be honest, although I bought the Scipio t-shirt, I am generally not in the market for them as athletic events keep my drawer bursting with them, and I have been relying upon them a lot for birthday and Christmas presents lately, so I probably won’t buy more than a couple a year.

Meanwhile, I get the ads. Also, Facebook seems to think I have a thing for otters, but really, I was just talking about Pauly Shore (the Weasel) movies recently. Well, okay, Encino Man, because it also stars Brendan Fraser. So who knows what the Facebook AI thinks?

All it knows is that it can extend advertising reach if I make fun of it.