On Friday night, the oldest boy stayed at a friend’s house, so the younger, my movie-watching buddy, and I watched a film. He’s always more patient with films; the older boy fidgets, wanders in and out of the room, and offers his commentary track atop what’s happening–but often needing to ask what’s going on because he’s been in and out. The youngest, though, will watch the movie, so it’s a treat to watch a movie with him.

I selected George of the Jungle. 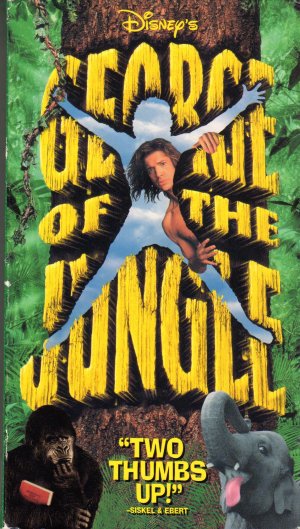 I don’t know when I picked this up at a garage sale; likely almost a decade ago when I was planning on watching movies with my children. Frequent movie nights have not materialized at Nogglestead; instead (no pun intended), we watch a movie every month or so. The last was Tron the end of last month. So I guess they’re picking up as we’ve also watched Ben-Hur and Clash of the Titans since the spring.

At any rate, I have a passel of kids’ movies that we never watched, and the boys are aging out of them. The youngest rankled at the trailers ahead of this film because they’re for Disney cartoons.

And not just any cartoons; this film was on a videocassette released in late 1997, so they’re trailers for Disney cartoons that Disney was only making available on video for a limited time. Do you remember that they did that in the late 90s? You could only get Peter Pan in stores during a 45-day window? They did that to really goose the sales. I’m not sure if it worked, but 23 years ago was a very long time.

When this movie came to video, I had been dating the woman who would become my wife for a matter of months. I surely wasn’t thinking about watching children’s movies from the era with my children in the world that is 2020.

As far as the movie itself goes, it has Brendan Fraser doing the Brendan Fraser thing. You know, like he did in Bio-Dome and Bedazzled which I just mentioned seeing in the theatres. I have a certain appreciation if not affection to the types of characters he played in those days. I don’t know how much I actually identify with them, but I had fun watching them. Although it looks as though he has been making movies this whole time, but nothing I’ve seen since, oh, The Mummy Returns.

This was not used in the film, however, as the theme was done by The Presidents of the United States of America who apparently were not exclusively a Disney property named after the Hall of the Presidents at Disney World (which was my first guess).

George of the Jungle also had a direct-to-video sequel and was rebooted as a Canadian cartoon in 2006 with a second season in 2016. So it’s due for a reboot soon especially if Disney owns its rights or can get a hold of them.

I piped the video directly to my television from the VCR instead of going through out twenty-year-old receiver, and the video was very clear indeed. The receiver has been having some trouble handling sound from the video sources, so I’ve taken to routing them to the television directly. It will be a shame to replace this receiver, as it has old timey connections that can handle our VCRs and old computers. I fear replacing it as I don’t want to lose that connectivity. But I fear I shall have too, soon. But that’s unrelated to what I was talking about. Watching what my boys would call an “old” movie on an “old” media format, and musing on things other than the content of that movie.

2 thoughts on “On George of the Jungle”