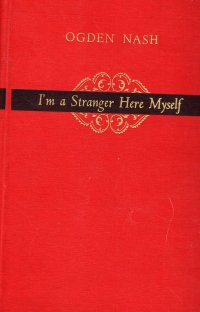 Aside from the (then) complete works of Emily Dickinson that I started to read in 1994, this might have been the book that took me the longest to read from beginning to end. I started this book probably nine years ago, back when I read other Ogden Nash collections and other poetry to my toddlers as they played. This would have been one of the last I started reading to them here at Nogglestead before I abandoned the practice. This volume languished in my bedside table and then on my dresser for a year (both book accumulation pointsa>) as I started to read it on the deck in the evenings.

It took me a while to get dialed into Nash again. As I said, it’s been a decade since I’ve read his work in earnest, and I’ve read a bunch of poetry since then, some good, mostly bad, but I found myself only reading a poem or two from this book before getting tired of the schtick. After probably a year of this mostly off and sometimes on reading, I packed the book along on a couple of trips and read it a little more doggedly. So I came to appreciate again the humor and get back into it.

So, if you’re not familiar with Ogden Nash, he wrote wry humorous poetry in the early part of the 20th century focusing on urban topics. He varied line length to a great degree and did some whacky spellings to make rhymes. Once I got back into it, I was amused appropriately.

One of the interesting things, though, is one of the allusions jumped out. From “Locust-Lovers, Attention!” we get this:

It is as fantastic as something out of H.G. Wells or Jules Verne or G.A. Henty
To watch a creature that has been underground ever since it hatched shortly previous to 1920,

Apparently, he was an adventure novelist from the 19th century who influenced a generation of writers. But he’s all but forgotten today.

Nash refers to Henty in another poem, “And How Is My Little Man Today?”:

Because you feel heroic like a hero out of Alger or Henty,
And a couple of degrees of fever are as stimulating as two drinks and as soporfiric as twenty,

Clearly he influenced Nash if nobody else. But I’ll have to keep an eye out for his work–most likely in the old falling apart books section of the book sales.

I’m not sure if I have any other Nash books scattered amongst the Nogglestead library, but I can tell you that I do not have any others on the book accumulation points. Now, I’ll have to delve into the Neruda that will likely surpass this book as the longest between start and finish since I read a couple of them to my children a decade ago as well.