So last weekend, I humblebragged on Facebook about my busy and pain-inducing Saturday: 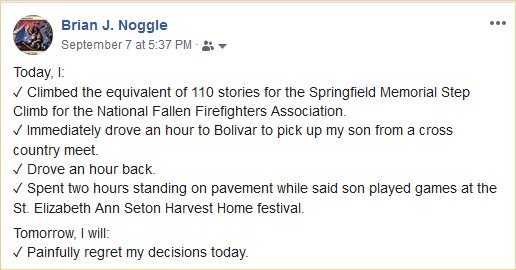 The stair climb was for the National Fallen Firefighters Association, and it involved climbing up and down every aisle at Missouri State University’s Plaster Stadium. Four laps of each aisle. It was single file, so it was more of a leg workout than a cardio workout. I did it because I wanted to see if I could, and I was humbled by the number of firefighters who were doing the climb themselves in full gear. So, yeah, I did okay for an old man, but nothing compared to those who serve.

I’d hoped I could do the climb in an hour and make it north to Bolivar (BALLiver) to catch my sons’ cross country meet (but for it, they would have joined me at the stair climb). However, the climb did not start at the time they said it would (8:30) because they had an opening ceremony, and when everyone lined up to begin, I stopped at the rest room first and found my way to the end of the line. It took a while to get started, so I was only done and back to my car about an hour before my boys were scheduled to run–but the expediency of the meet meant that events were moved earlier instead of later (which is generally how it goes at a track meet). So I got there just in time to pick up my son and turn around to drive another hour back.

Pretty much all of it was guaranteed to make my legs stiffen, and we then went to a church festival where I bought the lad too many tickets, so he spent a couple of hours playing the games there while I watched and encouraged while standing on asphalt.

So this weekend, I tried to top it.

While working with my brother and his brother-in-law, we talked about how we were going to feel after the strenuous activity, and we agreed it wouldn’t be good.

But I’m starting to wonder if humblebragging about how much we ache after that level of activity does not so much indicate how active we are, but how old we are. So I’m reconsidering bringing it up again in conversation, gentle reader, except for this blog post.

However, I think I will skip the martial arts class tonight.