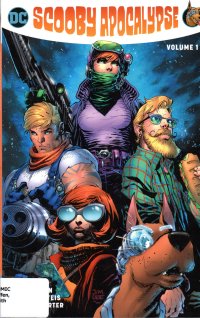 So, Brian J., you’re saying. It’s not enough that you count looking at artist monographs as reading a book for your annual total, but now you’re counting comic books? Well, in my defense, gentle reader, this is a collection of the first six comics in a re-imagining of the Scooby Doo universe published by DC comics from 2016-2019 (or so I learned on the Scoobypedia). So it’s not too far off from, say, Potbelly Mammoth or a graphic novel. He said in his defense.

One of my boys borrowed this from the library, and one of my boys (perhaps the same one that checked it out) this weekend said it creeped him out. So I picked it up.

The book reboots the story as post-apocalyptic fiction. Velma works for a secret corporate lab that has a plan to release nanobots that will reprogram humans to be nicer to each other. When she discovers that her superiors also will make humanity docile, she invites an obscure journalist (Daphne) and her cameraman (Fred) to the complex. They and a dog trainer (Shaggy) and an artificially augmented dog (Scooby) are the only ones who are unaffected when the triggered nanobots instead turn people into monsters. They grab a prototype armored vehicle and head out into the wastes in search of… Well, other survivors or other of the complexes.

Not much happens in the first six issues, really. We get some flashbacks about Shaggy and Scooby and Velma, but too many of the pages deal with the bickering between Daphne, who blames Velma for the apocalypse, and Velma, who really did. The actual action of the issues are kinda nil. Reading the above post about the cancellation of the series after 36 issues, I saw the same complaints with the whole run.

Oh, and spoiler alert: Taking a page from the movie, Scrappy Doo is a bad guy–but is arc is just beginning at the end of this volume.

Eh. I didn’t care for the reboot/reimagining. It didn’t creep me out, though.