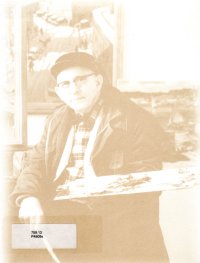 I liked this collection better than Jon Corbino: An Heroic Vision. They both come from the early part of the 20th century, where painting has been freed from the line, but Peters’ subject matter is more appealing. It depicts landscapes, generally creeks/rivers or docks, but with human figures in those landscapes.

Well, “figures” might be a little giving. Basically, they’re a couple of brush strokes. But the effect is more akin to the original Impressionist influence. Well, maybe it’s more akin to what I take away from my favorite Impressionism–a sense of a remembered scene or setting.

Unfortunately, as the introductory text indicates, Peters liked to do the same scenes over and over again at different times and in different seasons. So although most of the work is pleasing to look at, if you run through a catalog for an extensive show like this one, it’s repetitive.

But, like I said, pleasing to look at. The human figures make them more pleasing than Monet’s sterile, flora-only landscapes anyway.

I wonder if I will remember Peters or Corbino in a year month or two. Unless I see some of their things at the Springfield Art Museum sometime soon, and I can say, “A-ha! I saw a monograph in that artist,” probably not.