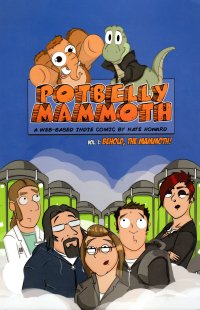 I got this book at Rublecon last weekend. Rublecon is a small comic/toy convention held in Relics’ event center. I missed it last year because when I pulled into the parking lot, I could not find a parking space, and my family was reluctant participants anyway.

This year, though, I wandered through the aisles. You didn’t get a Good Book Hunting post because this volume is the only book I bought aside from comic books.

This is based on a Web comic that has been going on for a couple of years; this book collects the first 100 of them and some other extra materials. The story behind the comic is that two roommates, Nate and Swadley, live beside a mostly abandoned laboratory. An intern left behind at the lab creates a tiny mammoth and a tiny T-Rex that the roommates adopt as pets. Nate gets laid off from his job and starts dating the woman who fired him.

The cartoons themselves have a flavor of what you’d get in a newspaper column. Each has a single gag, and the stories build themselves into larger story arcs, but those arcs are not the point.

So I liked it. Better than Frik. Better than RPG World. I don’t know if that’s fair, as the other two have story arcs and whatnot, but it’s pretty good, and I’m hopeful that he’ll get another book out soon, but it looks like the actual Web comic has been at #141 since February.

Eh, no hurry. I have plenty to read in the interim.