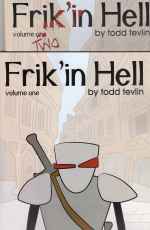 I swapped a copy of my novel for these books, since I know the author from the old BBS days, when he dominated the local CG64 boards as White Knight. Or maybe that was me.

Regardless, these books collect the first two years (already?) of his Web comic Frik’in Hell. The motif centers upon a medieval warrior who finds himself out of war-work and takes up as the counter man in a fast food inn. He doesn’t take it too well, and beheads customers in between visits to a support group, attacks of ninjas, and a quest by another character to create ketchup.

Strangely, given that I’m an IT professional, but Web comics don’t tend to draw me in. I see the occasional Penny Arcade and XCD-something (see? I can’t even remember the name of it). I did read another book made from an online Web comic (RPG World). But it’s not my thing. Old Heathcliff? My thing. Maybe even Marmaduke.

But if you’re hipper than me, check his comic out at frikinhell.com.