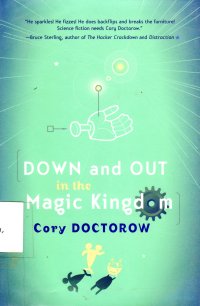 I bought this book six years ago because I recognized Doctorow’s name from the Internet. In those six years, I have read a pile of Executioner novels acquired that same day before picking this book up. In the interim, I forgot it was a novel, and I initially placed it in my carry bag last week to read at the martial arts school while my kids were in class (and I was not, as I recovered from the memorial stair climb).

But it is a novel, and to sum up: Nothing of consequence happens in an interesting world.

The extrapolated world has people constantly jacked into the Internet, extreme body modifications, and sort-of immortality via consciousness backup and restore to a clone. People live not on cash, but a currency based on social media reputation called Whuffies–if you do a lot of things that people on the Internet value, you have a lot of doors open to you, but if you do not, well, you’re on hard times. Down and out, one might say.

The narrator begins by recounting how he met his best friend, and then the main narrative explains that he (the narrator) returns periodically to Disney World after various adventures. His friend returns, out of Whuffies, and talks again about permanently ending his life. The narrator convinces his friend to not go out on the bottom, but to rebuild his reputation and to go out at his peak. So the two work with the narrator’s girl friend to manage part of the park.

The park itself is run by various ad-hocracies, like-minded individuals who come together to do things guided by people on social media who reward them with likes–and Whuffies–for good ideas. Another attraction developer moves into Liberty Square and threatens the status quo with new technologies–and someone murders the narrator, which makes the narrator go a little off in his defense of the status quo.

Spoiler alert: At the end, status quo is maintained. As I mentioned, nothing of consequence happens in an interesting world.

I’m not sure if the intended message is that nobody can move forward or change in such a society, but that’s what I took from it.

At a little over 200 pages, it’s a pretty quick read, and narratively, it pulls you along. So pleasant, but meaningless.