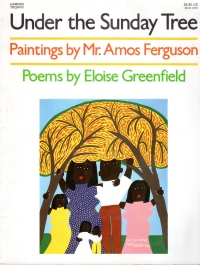 When I found this book at the Friends of the Springfield-Greene County Library book sale this spring, it must have been misclassified as Literature (that’s what the first page says) or maybe Art, but it’s actually a children’s book of art and poetry. I think it’s based on the art of the Bahaman artist Mr. Amos Ferguson with some verse by Eloise Greenfield added.

The verse is light and simple, which is not a bad thing in itself, but its depth is aimed at children, so it lacks real poetry meat to it. As does most of the poems I read in cheap chapbooks anyway.

The art, though, is primitive/folk art, and I really don’t know how to appreciate it. I mean, the paintings kind of look like the stuff I painted on the recovered white-coated cardboard tops of doughnut boxes that I used as my canvases when I lived in the trailer park and watched my first episodes of The Joy of Painting. I mean, I can look at Renaissance paintings and judge, knowing that it’s my opinion alone, good and bad, what moves me and what does not. I can do that with Impressionism. I can do that with a lot of European figurative painting. But with primitive and folk art styles, I really lack an aesthetic vocabulary to say whether one thing is good or better than another. So all I can say here is that it ain’t my bag, baby.

Which is weird, because most of the “art” I do in woodburning or etching is pretty primitive and folk-artish. Which explains why I have no idea whether I am any good at it or not. Which probably means “No.”