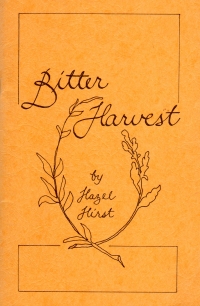 This book is a collection of 14 poems about living on a farm and then losing the farm. It comes out of the 1980s Farm Aid era of family farms lost to corporate interests, a genre that somehow was a big thing in the middle 1980s (a response to President Reagan, perhaps?) but has dwindled (although, apparently, Farm Aid is still going, so perhaps it’s just my awareness of it that has dwindled).

Apparently, the purchase of this book in 1984 included a raffle ticket to win the Hirst farm. The author and her husband, faced with debt and foreclosure, tried to sell 50,000 copies of the book to pay off their debts, but ultimately they cancelled the raffle. 50,000 is a pretty lofty target for a chapbook. Take it from a poet who thinks 100 copies is a stretch goal.

At any rate, the poems are lyrics, generally over 12 or 16 lines long and end rhymed. Opposite pages have photos of the family farm and the livestock, so it’s a quick enough book to read. Nothing that sticks out, really. A little more meat than Under the Sunday Tree but that’s mostly because the lyrics are lyrics and longer.

More interesting for the story behind it, though.