So I accidentally, after a twenty minute drive into the northwest corner of Springfield where I had no other pressing business, wandered into ABC Books. Well, not so accidentally: it was on a pretext of picking up gift cards to include in Thank You notes that my children will write to their teachers for the end of the school year. What? ABC Books is having a 50% off sale? Brothers and sisters, that is a Buy One Get One Free sale on books, if you know what I mean.

So I got some free. 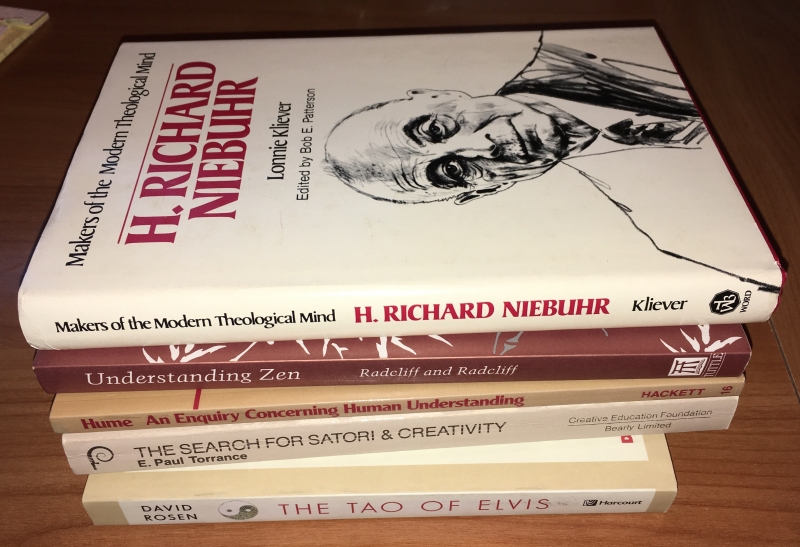 You know, I’ve been reading a lot of philosophy and Eastern religion stuff of late in addition to listening to audio courses on the same (I’ve been holding out on you, and I promise to make it up to you once I get around to it). What, you don’t believe me? See this and this and this and this. As to the Western philosophy, trust me or not.

As I’ve read some ancient texts (including the Tao Te Ching and others, I’ve started to bog down on them. So I’ve commented to my beautiful wife that I might be done with them. Just in case I am not.

However, that did not preclude me from picking up books on theology, primary texts in Western Philosophy, and secondary work.

With the gift cards, the total was eleventy billion and nineteen dollars (including some comics and such for the children). I don’t know how fast I’ll jump on these books in my reading–I’ve quite obviously been bogged down a bit, with a number of books in the middle of completion and the number of bookmarks available for new reading reaching critically low levels. But I just feel smarter for having these books in my library.