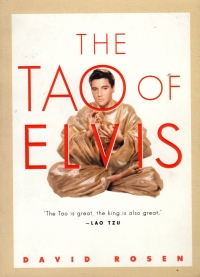 I got this book at ABC Books about a week ago, and I jumped right on it. I read it quickly because there’s not a lot of text to it, although perhaps more than in the actual Tao Te Ching.

The author is a Taoist Jungian psychoanalyst, so you can probably expect what you’re going to get: Presentation of Elvis as an archetypal Taoist king. The book consists of an introduction that stresses this, followed by 42 “chapters” (one for each year of Elvis’s life). Each chapter consists of a theme title page with an epigram, three or four quotes from the Tao Te Ching or other Taoist thinkers, three or four quotes from or about Elvis, and a couple paragraphs expounding on the theme. Themes include things like Knowledge and Wisdom, Home (Graceland), Innocence and Play, Work, and Success and Failure (see how important the serial comma is in that list, people?).

At any rate, it’s as much a book about Elvis as it is the Tao, really. Most of the bits of Taoism are taken out of their context, but after reading the Tao Te Ching, I can say they’re probably more appealing and understanding that way, without the next line that doesn’t really follow. That is, I read it more to see what Elvis said that the author of this book pulled out more than I read to see what the Taoist thinkers said.

I think the author tried a little too hard to tie the concepts together, and given the publication date (2002), I can’t help but wonder if he missed the sweet spot of capturing an audience with relevant knowledge of and appreciation of Elvis. Even my friend who used to be an Elvis impersonator is past that now, and he held on into the early part of the century (although living near to Branson, I know there is still some need and draw for them). And about the cover: Is that a yoga (Hindu) pose?

Which is not to say there aren’t lessons in the book: It introduced me to some Taoist thinkers beyond Lao Tzu, so it’s worthwhile in that regard, I suppose.

In other news, this book quotes the one book I have ever read on Elvis, Caught in a Trap by Rick Stanley. Although not as cool as when one philosophy book I read refers to another I’ve read, the cross-reference in my head is still somewhat cool.