Well, I broke my streak of weekends where I attended festivals at four. You can find other festivals and small town fall shindigs within an hour’s drive from Nogglestead, but other things were on the agenda this weekend.

Such as the famous, or at least capitalized on this blog, Weekend of the Three Stadia.

So, on Friday night, the marching band performed at the home football game, so of course we were present. 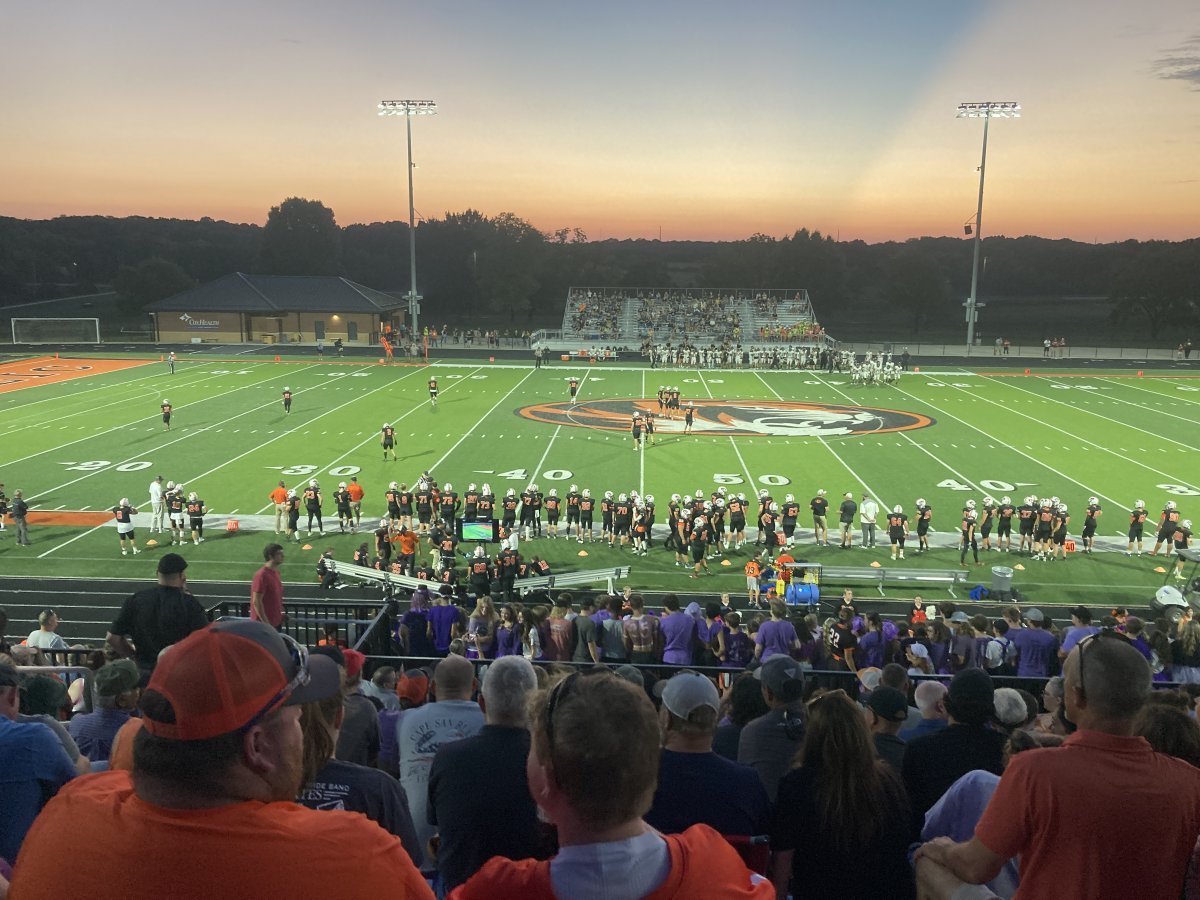 You might ask, “Did they replace #2, the 5’5″ player who has since graduated?” Indeed they did: they have two kids about 5 and a half feet tall this year returning kicks and acting as running back at times.

Friday night’s game was well over three hours, as the score was 68-43 with a lot of penalties. Also, someone was very bad with the clock. The clock stopped in tackles in bounds and for a variety of reasons. Through most of the game, I blamed inexperienced clock keepers, but at one point, I looked down and saw the official signaling time out after a tackle in bounds. So it might have been inexperienced officials. The Missouri State High School Activities Association has a mercy rule that says when the score gets to such a differential in the second half to keep the clock running regardless of the situation–but the home team did not get that far out ahead. They stayed only two or three scores ahead, and their opponent could throw the ball, which led to a number of one down touchdowns. So it went on.

Which was bothersome, because I had not eaten. I had planned to get a burger at the concession stand, but I did not want to surrender my seat in a crowded stadium. So I thought I would get something when I got home a little after 9pm. And with each passing minute of game time, I thought I was closer to it, but I didn’t want to spend the money if I didn’t have to. But I did want to have something because I was supposed to be carb loading, or at least not undernourished when I got to Saturday morning.

Because I had the NFFF Memorial Stair Climb at Plaster Stadium on the MSU campus. 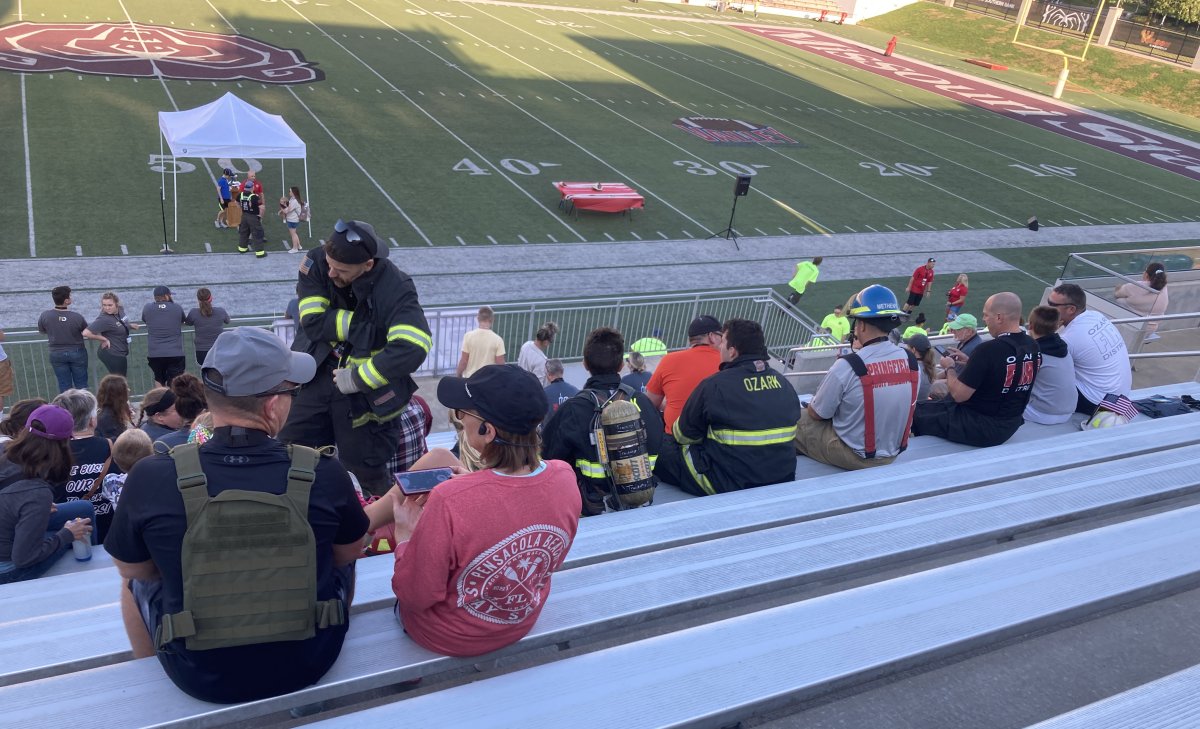 As my boys had a marching band thing that day, they could not join me, so I did it alone.

The Memorial Stair Climb raises funds for the families of the first responders who lost their lives on September 11, 2001, and hopefully others as well.

But when I’m sitting alone, I envy the camaraderie and the bonds that the first responders share. I feel the same sort of envy at the Ruck and Run, which benefits veterans’ organizations. It’s been a long time since I’ve had shared bonds and experiences with people. My family when I was young. Places where I’ve worked a bit, but not something that lasts a lifetime. Instead of sitting alone on the bleachers feeling sorry for myself, I tried to focus on their honor, and I knew I was not the only non-first responder or affiliated family there. I also felt a little guilty that my first thought, and the reason I did it, was not so much to honor them or raise money for them but rather because I wanted to prove to myself that I could climb 110 stories (78 flights according to my fitness tracker) in an hour and ten minutes. How bad of a person does that make me? 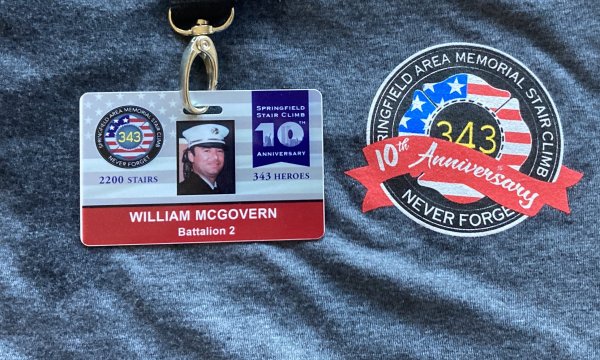 So I finished that, went home for a shower and a nap, and then I was off to watch my boys in their marching band. 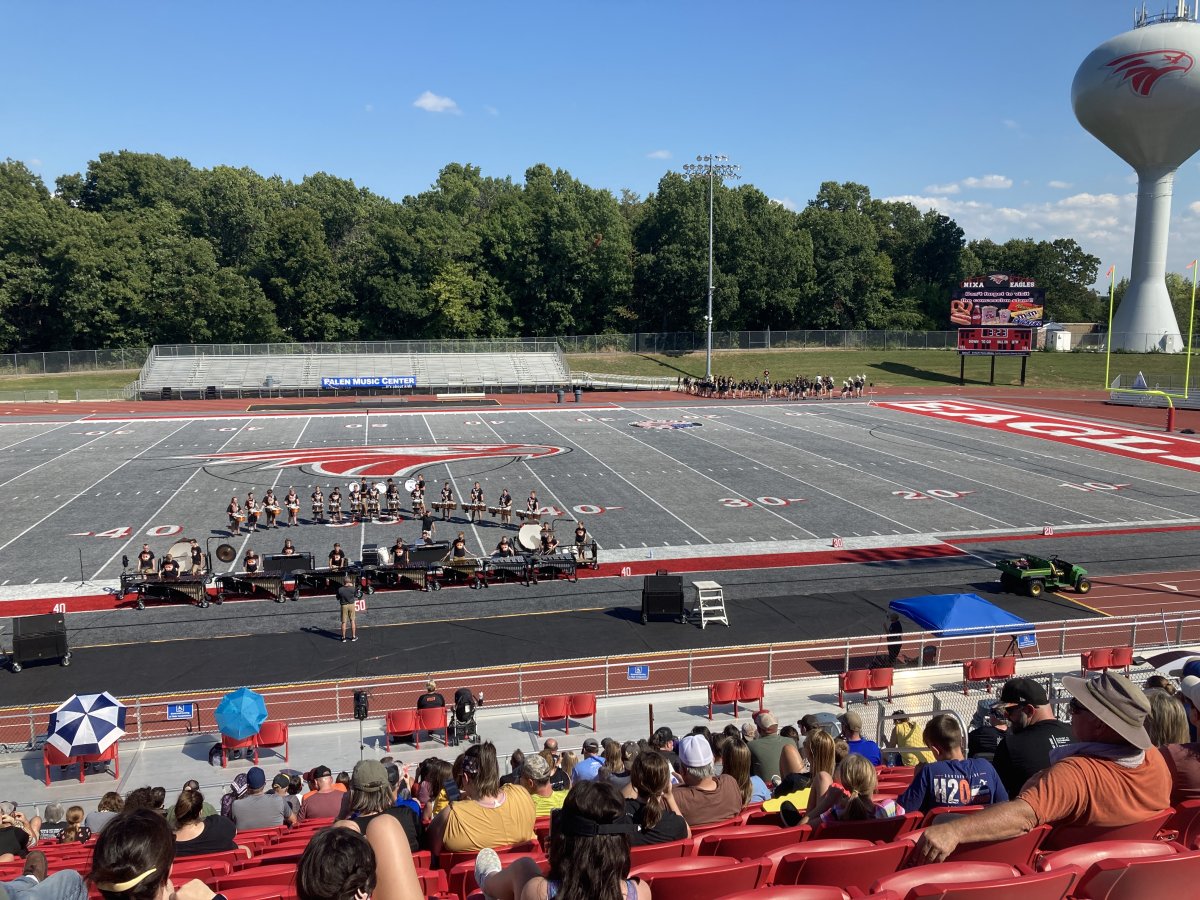 It was a clinic and not an exhibition. The school took the field at 3:00 sharp (on schedule), performed the show, and then broke into groups (color guard, percussion, everyone else) to get some advice for improvement, and then at 3:40, they reassembled and did the show again, hopefully better.

So we were in and out in under two hours, which is good, because my legs began to stiffen the moment I stopped moving. In the event of an actual exhibition, I could expect to spend eight hours or more in bleachers.

Which is coming next weekend. After the triathlon.

At any rate, I did not visit any stadium on Sunday (or since), although the church sanctuary is kind of like a stadium–pews that rise from the altar in a semi-circle. But I’m not going to count that. It makes it like I’m reaching for blog content or something. Which I am.

1 thought on “The Weekend Of Three Stadia”