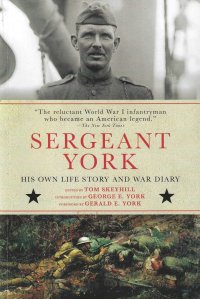 As you might remember, gentle reader, I watched the Gary Cooper film Sergeant York with my boys in 2020, and I bought this book shortly thereafter. I took it on vacation with me to Wisconsin earlier this month, and I read it in a night or two. It’s a pretty fast read, as I assume it’s based on notes taken while York talked to the biographer (Skeyhill). This leaves York’s voice in the vernacular, which might diminish the readability a bit, but it’s not hard to follow once you’re used to it.

When I saw the film, I found it odd that the film focused so much on York’s youth and his draft and subsequent attempt to get a conscientious objector excuse. But it follows the book, which talks a lot about York’s region, family, and upbringing before getting to the war three quarters of the way through the book, and then it’s presented as his diary and official documents about the battle that earned him the Medal of Honor, so that’s really only a small part bit of the book. The book does go on into greater detail of York’s philanthropic endeavors after the war, supporting education and building a school in his county.

So I enjoyed the book a lot.

I did mark some things in it, though.

So he went straight to the Alamo. He was right with them when they was surrounded by the thousands of Mexicans. He fought like a bearcat and when the Mexicans broke into the fort in the morning he was one of the six men still living. He was backed up in the corner of the fort with a broken rifle and a big bowie knife in the other.

Would Davy Crockett have called it a Bowie knife given that Jim Bowie was right there at the Alamo with him? Probably. Bowie and his family were knife designers at the time.

When discussing the history of the area, he talks about blood feuds a bit:

I know they often pose as wronged people, but jes because you are wronged doesn’t permit you nohow to go a-gunning for vengeance: “Vengeance is mine, saith the Lord.” “An eye for an eye and a tooth for a tooth” ain’t part of the Constitution of the United States.

The Sunday before I read that, our pastor brought up in the sermon that the Lex Talionis (an eye for an eye) was actually a limiter to keep feuds/revenge from escalating–that is, if someone knocks out your tooth, you can knock out his tooth, but you cannot kill him and his three brothers.

Not a hot media take:

I kinder like laying out under the trees watching squirrels. They are the workinest animals. They are never still. They are always up and a-doing, picking nuts and whittling them to get the kernels out and storing them away against bad timesl and feeding their young ones and teaching them to cling to trees and travel over the tops of forests. They’re kind of impudent, too, the way they chatter and scold. Squirrels sure have a heap of confidence in themselves and they’re pretty tricky, too. They don’t seem to mind you watching them, but they sure know when you’ve got a gun around.

That’s more of a cool media take, although books are not newspapers. I am referring to Nuts about Squirrels which I read earlier this year.

An ign’nt man from the 19th century:

And somebody told me that Bobby Burns, the Scotch poet, used to make up a lot of his rhymes while ploughing and harrowing; so I went and read me that one about the mouse. That’s poetry. Only a man who knows about the soil and the little critters in it could have written that.

He did not have much formal education, but he knows Robert Burns.

One other discrepancy is that the song “82nd All The Way” says he was assigned to the 338th Infantry regiment. However, he was actually in the 328th. Which shows how you can be inspired to learn history from heavy metal, it’s best to recognize it might not be 100% accurate.