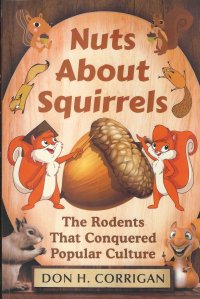 I bought this book last summer on a trip back to the St. Louis area. As I mentioned then, Mr. Corrigan as the editor of the Webster-Kirkwood Times, published at least one of my letters to the editor. So full disclosure on that, not that I pull punches on people who’ve published me (of whom there are very few) or people I meet in person (sorry, again, S.V.).

The subtitle of this book is “The Rodents That Conquered Popular Culture”. So when I started reading it right away during our vacation in De Soto, but I got fifty or so pages in and bogged down. I had expected a light-hearted look at squirrels, but instead, it looked like it was really turning into a serious study of squirrels. So it languished on my chairside table for a year until I decided to clear the table of some books that had been on the table for several years untouched (rest assured, gentle reader, I did leave some books on the table that had been there for several years untouched–I do have stretch goals of reading them sometime in the next couple of years). In the winnowed stack, this book remained, so I picked it up again, starting not from the bookmark but from the beginning.

And on this second pass through, it occurred to me that this is not about squirrels per se; this is a book about how squirrels are portrayed in different media, with each medium having a different take on squirrels, whether they’re cute or a menace, based on the type of thing that sells in that media. So wait a minute–Corrigan is a professor of media at Webster University–is it possible that this is a book about media and is only using squirrels as an example? I felt kind of clever catching on, whether I caught onto the real purpose of the book or not, and it helped me power through.

Although by the end, I wondered if that was really the point. Or if perhaps the author lost the point. Or padded it out with more squirrel stuff.

The early parts of the book:

So you can see the progression of sorts of squirrels in different media in kind of a historical context of the march of media, but then we get chapters about legendary squirrels, which makes one wonder if it is supposed to be a book on squirrels, and not on the media using the metaphor of squirrels, after all.

At any rate, the illusion or miscomprehension got me through the book. It could have used some editing–some bits are repeated almost verbatim within the same chapter, as though the book might have been different articles with similar material that got stitched together without removing the material repeated in the different source essays.

So kind of an academic book, but I’m not sure which direction its academic study is.

I have some flags in the book; let’s see what struck me as I was reading.

In Winter’s Bone, a woodland squirrel is cruelly disrobed and skinned by Actress Jennifer Lawrence after she has shot the animal to put on the table for her hungry siblings.

Well, that’s a city boy way of putting it, I suppose. Also, note that the squirrel is tended to by a character in the movie, not the actress. C’mon, man.

Marshall McLuhan was very familiar with squirrels on the college campuses where both he and the squirrels of his time thrived.

One of the reasons I thought the book was supposed to be a media textbook is the constant reference to McLuhan (remember, gentle reader, I read McLuhan’s The Medium Is the Massage in 2015).

Also, this passage brought to mind my time at the university (Marquette, not Webster) when I would sit between classes on the wall between the library and the Joan of Arc Chapel and feed peanuts to the tame squirrels. They would climb right up on me and perch on my shoulder for their tidbits–somewhere, maybe, still, someone has a picture of it, as the parents of some visiting high school kid asked to take my picture with one of my little friends. But I digress.

In Anchorman 2, Ron Burgundy (played by Will Ferrell) sits at his anchor desk and presents the news. Behind Burgundy sit his colleagues, tossing a football back and forth (much like pundits and commentators do regularly today on the FOX Cable News set). Burgundy prepares his audience for “a Channel 4 news exclusive” caught by his “lucky cameraman who happened to catch an unusual aquatic daredevil.” The star squirrel then entertains the nightly news audience, perched on his water skis and pulled by a tiny boat. A close-up shows the squirrel’s bushy tail skimming the waves as he circles the water several times. Burgundy laughs and tells his news audience, “His name is Nutty the Squirrel, and he’s three years old. How about that? That squirrel can water ski!”

Aside from the factual error about the movie and the dig at the Right Wing Bad People (the book has some, but not an overwhelming number because apparently Corrigan does not know how much the Robertsons of Duck Dynasty like squirrel meat–but I do), aside from that, as Corrigan previously explained in the chapter on television squirrels, skiing squirrels were a thing at one point.

When talking about Revolutionary War and Civil War era woodsmen, Corrigan quotes a writer for Field and Stream who lauds:

Many could tell you what bird that is simply by the song.

Leaping lizards, but that is a low bar for a woodsman. It’s kind of what you would expect out of a Cub Scout from days past and maybe not so much now but surely the American Heritage Boys, and probably many country kids, could tell you that. Although, gentle reader, I am as much of a city kid as Corrigan probably is, but at least I have some sympathy for squirrel hunters that the author lacks.

So, it was a book, and I read it. The thing I will probably retain most, aside from the illustrations of how different media portray the same thing differently based on their own needs, is Squirrel Girl. Seriously, I completely missed her in the comics, as I come from a different era with different esoteric superheroes.