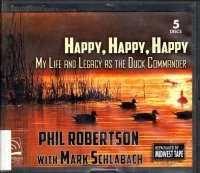 Taking a break from the audio courses, I picked up this set of CDs to listen to in the few times I’m in the car alone for any length of time these days. As it’s summer, I’m not spending half of my car time going to pick up or coming back from dropping off a boy–I generally have one or more with me. So it took me a while to get through this set of 5 CDs even though it only runs about five hours. In the other seasons, I can easily listen to five hours of lectures/audio books a week.

No, I’ve never actually seen an episode of Duck Dynasty. I mean, last year I read Si-Cology 101 by/about one of Robertson’s brothers in the company; the book mentions this book on a promotional page at the end, but I didn’t guess I’d get it a year later. I have also drinken the wine. And I used to buy Duck Dynasty-themed stuff for my aunt at Christmas. But not the television series.

This book, read by his son Al Robertson, tells Phil Robertson’s biography from his childhood through college football (he was the starting quarterback at Louisiana Tech ahead of Terry Bradshaw) through some booze-soaked years hunting, teaching, and running a rowdy bar until he becomes a Christian and straightens his life out. He becomes a commercial fisherman and then designs and builds a better duck call that he builds in his workshop and starts getting into stores in the south, eventually including Walmart (starting with individual stores, which was unheard of). Robertson also draws lessons from his stories to try to help the reader/listener learn from his experience.

So he’s got lots of hunting stories and drinking stories. He is a little older than my father would have been, so when he talks about boozing and hunting and being crazy, that kind of fits with what my father was through his discharge from the Marines and through the 1970s, except instead of coming to Jesus, my parents divorced.

So I enjoyed it a bit from that perspective just like I like to read the local columnists in the small town papers I take–they tell the kinds of stories that my father would tell.

So worth the five hours. I might even end up with some of the Duck Commander or Duck Dynasty videos if I stumble across them.