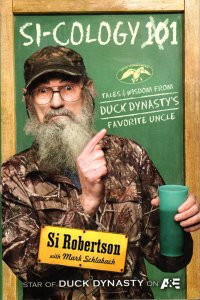 I got this book in my first ABC Books online order during the past-but-sorta-current unpleasantness, and after I finished the Agatha Christie omnibus, I fully expected to jump immediately into the ordered books because last in, first out. After all, I was excited to receive them in the mail, so I should jump on them as soon as I could while I was still sort of excited about them. Also, these books will be atop and in front of other books, so they’ll be the ones closest at hand.

Si, a member of the Duck Dynasty clan and a popular part of the show, recounts his life through stories from his youth and his army days peppered with tall tales and old jokes recounted as though they actually happened to him. It’s a pleasant enough read; it’s 230 pages, but lightweight prose that moves quickly.

I do have one quibble, though. When he’s talking about a military posting in Massachusetts, he talks about the crazy accents they have, and he says:

The first time I walked into my barrack, I asked a sergeant where I could find some water to drink.
“The bubbler is down the hall,” he said.
“The what?” I asked him.
It took me a few minutes to realize he was talking about a water fountain.

That sergeant isn’t from Massachussetts. He’s from Wisconsin, Jack!

I have never seen the program, but Duck Dynasty had been a gift schtick for my recently passed aunt. She’d mentioned something about the show at some point, probably tut-tutting it, so for most of the last decade she got at least one Duck Dynasty branded product (but not the wine) as a Christmas gift. So reading the book kind of reminded me of her. Strangely enough, my other aunt (who once lived in Texas) spent a great deal of the decade living down the road from the Robertsons in Louisiana. Well, as down the road as Mickey Gilley’s anyway. That other aunt, my only remaining one from that side of the family, was and is a vagabond and is probably due to move soon.

Having read the book, I’m interested in seeing a bit of the program to see what prompted the interest in Si–it’s claimed that fans of their outdoor program and later Duck Dynasty wanted to see more of him telling stories like those in this book. I would, too. He is a couple of years older than my father was, and an outdoorsman, so he could serve as some middle-aged proxy of sorts. Well, not that psychologically deep, but still.

At the end of the book, there’s a page marketing the other books in the Duck Dynasty series, including a cookbook and a book by/about the head of the clan/company. Which leads me to believe that someone believed that fans of this show could read, which probably differs from what the friends Facebook shows you would believe. Maybe I’ll pick some of them up at the book sales to pair with my Duck Commander wine if they even make that any more.