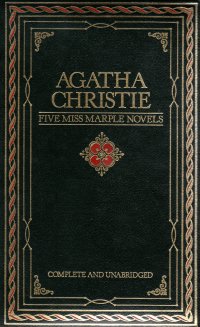 This is the famous five-novel omnibus that my grandmother sent me earlier this year. It includes the following novels:

So, Brian J., did you figure out the murderers? You know, I knew by page 70, about halfway through The Mirror Crack’d, but I might have read that book before. I also remember Mrs. McGillicuddy seeing the murder from when I read that book in high school, but I didn’t remember whodunit. So I was one for five, ish, as I knew in what direction the murderer lie in What Mrs. McGillicuddy Saw!. But perhaps I kind of remembered it. Also, I knew kind of something in Nemesis, but not exactly.

My beautiful wife asked me which was my favorite, but to be honest, that’s like asking what your favorite Executioner book is. They’re formulaic, but of a different formula than men’s adventure paperbacks. Someone Miss Marple knows or somewhere Miss Marple goes has a murder on her/its hands, and she acts all dithery but listens to people and compares them to a list of people she’s known to ferret out the killer. The books often feature common tropes, such as:

Reading five relatively close together means I can spot these tropes. I imagine if I read a bunch of them, I would get better at figuring out whodunit. I think I was better at them when I was reading a bunch of them at the beginning of high school, but in the interim, I’ve gotten a little more used to hard boiled or modern thrillers which are less clue-driven whodunits.

Also, the body in the library thing. The last novel is entitled The Body in the Library, as a matter of fact. You know, in reading these old English mysteries, libraries aren’t good for much except killing people or stashing bodies. You know, I have often dreamed of having a home with a proper library, but English mysteries might be killing that urge in me.

So it was a nice way to pass some time. Although I’m not sure I am in the frame of mind, really, to get the most out of English or modern cozy mysteries, although I will read them from time to time when I find them on the to-read shelves. Or when my grandmother sends them to me.

This is a pretty nice edition, too, with Genuine Bonded Leather cover and gold paint atop. Probably archival paper, too. Chatham River Press must be akin to Easton Press in publishing nice editions of books, but it looks like they’re no longer in business. Still, although Nogglestead does not smell of mahogany, it’s nice to have as many leather-bound books as possible.