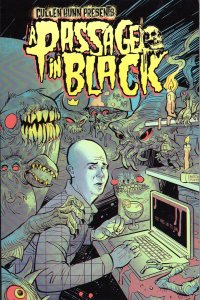 I bought this book at LibraryCon last year (is it showing off my riches to link to posts that illustrate how profligate I am in buying independent artists’ and writers’ work at fantasy conventions?). After reading the long Agatha Christie omnibus, I wanted something shorter to pad out my annual to-read collection. So I essentially read this on Wednesday night after finishing the Agatha Christie.

I told my beautiful wife that Cullen Bunn was a horror writer, but that’s not exactly true. He’s a comic book writer, and this is an independent collection of some of his stories that he’s turned over to other comic book artists (aside from his normal co-workers at the big publishing houses) to draw up and whatnot.

We’ve got eleven stories set in the horror milieu with different drawing styles. Unfortunately, the depth of the stories is a little thin–at least from a textual perspective. As you know, gentle reader, this is a peccadillo of mine: That modern comics have thinner stories to make more room for the art work, which someone decided is the whole reason for comics in the first place and should be paramount.

The stories themselves are of the type you’d find in D.C.’s Secrets of the Haunted House (although how would I know? I was a Marvel kid), albeit a little thinner. Perhaps those old stories were padded to stretch two into a comic, or maybe they had ads in them to make them seem longer.

At any rate, a quick enough read (look). It didn’t inspire me to try my hand at more fiction like The Twilight Zone Encyclopedia did, but, on the other hand, this represents eleven story set-ups that Bunn came up with that turned into a finished product. Which is a far better track record than I have over the last decade, which is basically two completed poems and maybe a short story nope, that was completed in the first decade of the century, not the second. So maybe I should get to work and get into the game before I tut-tut someone else’s comic book stories too much.

Also, when I went looking for the book of Charles Sander Peirce last weekend, I turned up a lot of books I wished I could read right now but I had to finish the Agatha Christie omnibus. Now that I’m done, though, I’ve forgotten which books I was so hot about, so I’ll probably pick up another graphic novel I bought at LibraryCon or an Executioner novel instead.