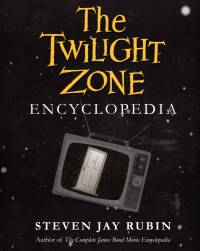 I bought this book when I saw a conservative blog I read (I forget which, but I hope it’s not the hoity-toity Ace of Spades HQ Sunday Morning Book Thread since OregonMuse posts my books) mention it and say that it was anti-Trump or something. To be honest, it’s not particularly anti-Trump: It does not mention him by name, which is refreshing in a book you’ve been told is a sucker punch hit job. It does say that The Twilight Zone told uncomfortable truths/stories (which is kind of like the Resistance, amiwrong?), but you see that sort of thing in a lot of books touting shows, both current and historical. A couple of entries have phrases of dubious provenance but that are clearly meant to refer to These Dark Times, such as mentioning jackboots returning in the 21st century and whatnot. But overall, not something that Michael Moore or–what’s that guy that was a “comedian” and then “Senator” from the state that elected that wrestler who wore feathers as governor?–would have written.

But I got it because I remember a little of the show and thought it might be interesting.

I’ll be honest; at the outset of reading this book, I could only remember one episode of the show (“A Stop At Willoughby”, which I saw sometime in adulthood, I think). As I read it, I also remember seeing “The Shelter” at some point in my youth, probably in the 1980s when another Republican was in office, and the fear of nuclear war led to great art like The Day After and Testament (not the band) as well as a whole genre of post-apocalyptic movies.

But this book is a bit of nostalgia trip in taking me back to my youth, when this program was syndicated and available for watching (although apparently I didn’t watch or remember too much) along with a lot of other old black and white programs. The book itself is entries for individual actors, actresses, producers, directors, musical composers, and other people associated with the series along with the individual episodes, themes, lots, and other markers from the series. So when running through the actors who played in this program, it listed other things they appeared in, including series like Combat!, Black Sheep Squadron, and other things that hit syndication while I was coming of television watching age and beyond. Notable actors who played in epidodes of The Twilight Zone include William Shatner, Jack Klugman, Jack Warden, and others that I know mostly from other works. Still, it was a varied bunch, and their connections to old television shows that I sort of remember remind me of a time. You know.

Secondly, the list of programs that I don’t recognize humbles me a bit. I mean, many of the anthology series (Playhouse this and sponsor Theatre that) were done live, so recordings do not exist. Other shows, like Peter Gunn and so on, I recognize the names but don’t think I’ve seen. I didn’t see them on television in the day, and I’m not sure they’re easy to find on television (or other media) today. There was a whole world of television that came on before I was self aware and that I’ve never seen. Likewise, the movie credits indicate a wide world of films, including war films and detective movies, that I’ve never heard of and have never seen.

So the book rather inspired me to look for some of these things to view. And, of course, to watch the television program itself which I see is available on Blu-ray for less than $60

I’d say “I hope I can get some use out of this on trivia nights,” but trivia nights’ trivia tends to be more recent than this program these days.

But I enjoyed the book. And I paid full price for it and don’t regret it, which says something.