As I said in my book report for Comic Art Now:

So that might explain why I take a little less out of books like Frik’in Hell and why I don’t do comic books as much as I did when I was younger; I’m more into the prose than into the art, and when that art takes precedence over the story, I’m not sold on it.

Sometime in the 1990s, comic books turned a corner. Where the classic stuff was stories with pictures, comic book artists started getting a lot of recognition, and suddenly the art–the pictures–assumed a primacy over the story and plot of the comics. Comic Cave, a local shop, has a number of relatively recent titles available for $1 each, so I’ve been reading some 21st century comics both from Marvel (the only major house that matters) and independent companies, and in all of them, the actual things going on are reduced so bigger panels with bigger pictures rather than smaller panels with words in them.

A glaring example of this comes from a series I just read called Mek. Strangely, I got all three issues of the limited series, which surprises me: usually only incomplete limited series runs appear in the dollar bins. Perhaps the pricer at Comic Cave thought there was an issue 4 and priced this trio of books accordingly. At any rate: 1) I feel like I got away with something with the pricing and 2) I get the whole arc of the comic, which ultimately isn’t much.

You can use the number of words in a comic book to determin how much the value of the story has declined. Consider all the dialog and setup you used to get in golden through, what, bronze-age comic books. Now, take a look at the first four pages of the second issue of Mek: 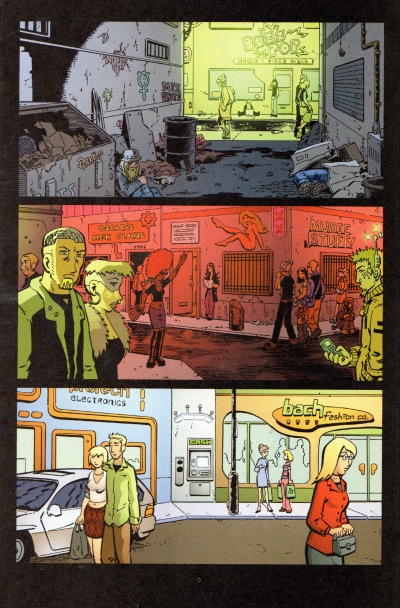 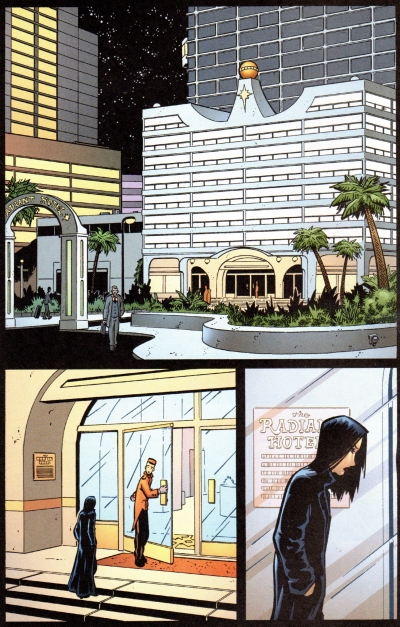 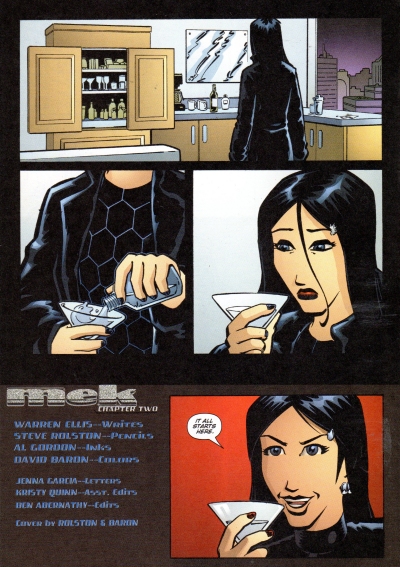 You’ve got four pages of the protagonist going through the city to her hotel, pouring a drink, and starting a flashback with only four words of text across four pages. This is not that much of an outlier to the books. There are many pages of panels without text, which only showcases the art and does not really add complexity to the story or to the characters.

When people talk about the decline of comic book sales over time, they talk a lot about the injection of politics into the storylines or the crazy gimmicks in changing the iconic character into someone else, but that’s been a part of comic books since almost the outset of comics–or at least the 1980s (see also Jim Rhodes as Captain America or the crazy Kane saga in the Spider-Man titles). But they don’t talk about the decline of the stories themselves into mere skeletons upon which to hang modern American pop art.

But look at kids and young adult books like the Diary of a Wimpy Kid series and the others like it that have stories and characters built around drawings. Very, very popular, and perhaps fitting in the light reading gap left by adult, art-driven modern comic books.