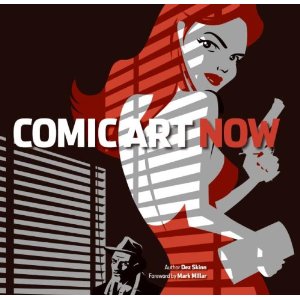 I bought this book in the discount bin at the grocery store a couple years back. It’s an art gallery style book sampling modern comics, particularly focusing on independent artists who are doing creative work with the new technologies.

I mean, there are some smaller books in the Marvel line mentioned, but most of it is smaller artists publishing their own work. The focus is not American comic art, either; the book features a lot of British, Brazilian, Japanese, and European artists. The author is himself a British comic book editor, so there you go.

The biggest insight I got out of it really has more to do with my own relationship to the comics, such as it is these days. As I was going along, I read the captions for the art first and only then, sometimes, looked at the images briefly.

So that might explain why I take a little less out of books like Frik’in Hell and why I don’t do comic books as much as I did when I was younger; I’m more into the prose than into the art, and when that art takes precedence over the story, I’m not sold on it. I’m that way with films, too, I guess. Come to think of it, I’m that way with prose books, too.

So it’s an interesting book to page through, and I liked it. But not enough to go buy a stack of comic books.