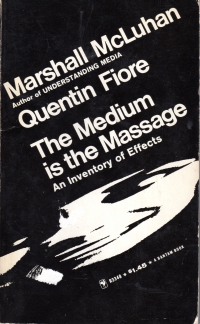 No, it’s not a typo: The word in the title is really massage.

This book is an ex-library book from El Camino Real High School. There’s not an El Camino Real High School nearby; as a matter of fact, the only one I found on the Internet is in Los Angeles. There might be another one in Arkansas or something (let’s face it, the Spanish Camino Real was akin to highway numbering/designation–in St. Louis, it’s known as Kingshighway still and encompassed part of Lemay Ferry Road).

So, what do we have here? We have a mixed media style presentation where McLuhan continues to develop his theory of cognition and his errant philosophy of life in the digital age. As he spins his theory of how electronic media circa 1967 are altering brains and freeing the youth from the old, square ways of thinking, we get visual elements like like a series of close-ups of a foot with toenails zooming out throughout the book, repeated words making the prose into a concrete poem, and approximately six visible womens’ breasts in various images. Counting them makes me feel prudish, but this was a high school library book, and I’m hearkened back to a local controversy vis-a-vis Slaughterhouse Five.

At any rate, I thought McLuhan gets some of his prognostications correct in how immersive electronic media would become (remember, he’s writing this before home computers, smart phones, and the Internet). He does understand a bit of how that will alter the thinking of youth–fifty years later, it has continued, but not beyond his imagination. Kids have the ability to do greater and greater mash-ups. But.

Unfortunately, he suffers from a big bunch of Platonic thought in that he thinks the concepts described in electronic media are primary and more important than the things being described and conceptualized and seems to indicate that everything that happens (happenings, he calls them, in that sixties way) are instantiations of something else.

But that’s not the case, and the freedom he loves about electronic media is unmooring youth from the concrete aspects of the world so that electronic media and the people who learn cognition from it seem to be all idea and little attachment or understanding of the underpining reality of concrete things that drive that world of ideas.

Maybe the reprinted advertisement for developing a powerful memory on page 115 or the picture of a face stretched horizontally across the top 56-57 where the text is printed upside down in the book refute me on this.

It’s an interesting, thought-provoking essay in a history-of-philosophy sort of way that calls the youth of the Boomer era to some inchoate protest and to open the doors of perception or something. Unfortunately, the essay is couched in a collage of images, goofy printing and design tricks that must have seemed paradigm-shattering at the time (and perhaps reinforced the message, again, at the time) that detract from the staying power of the volume.

How did it do as a library book? 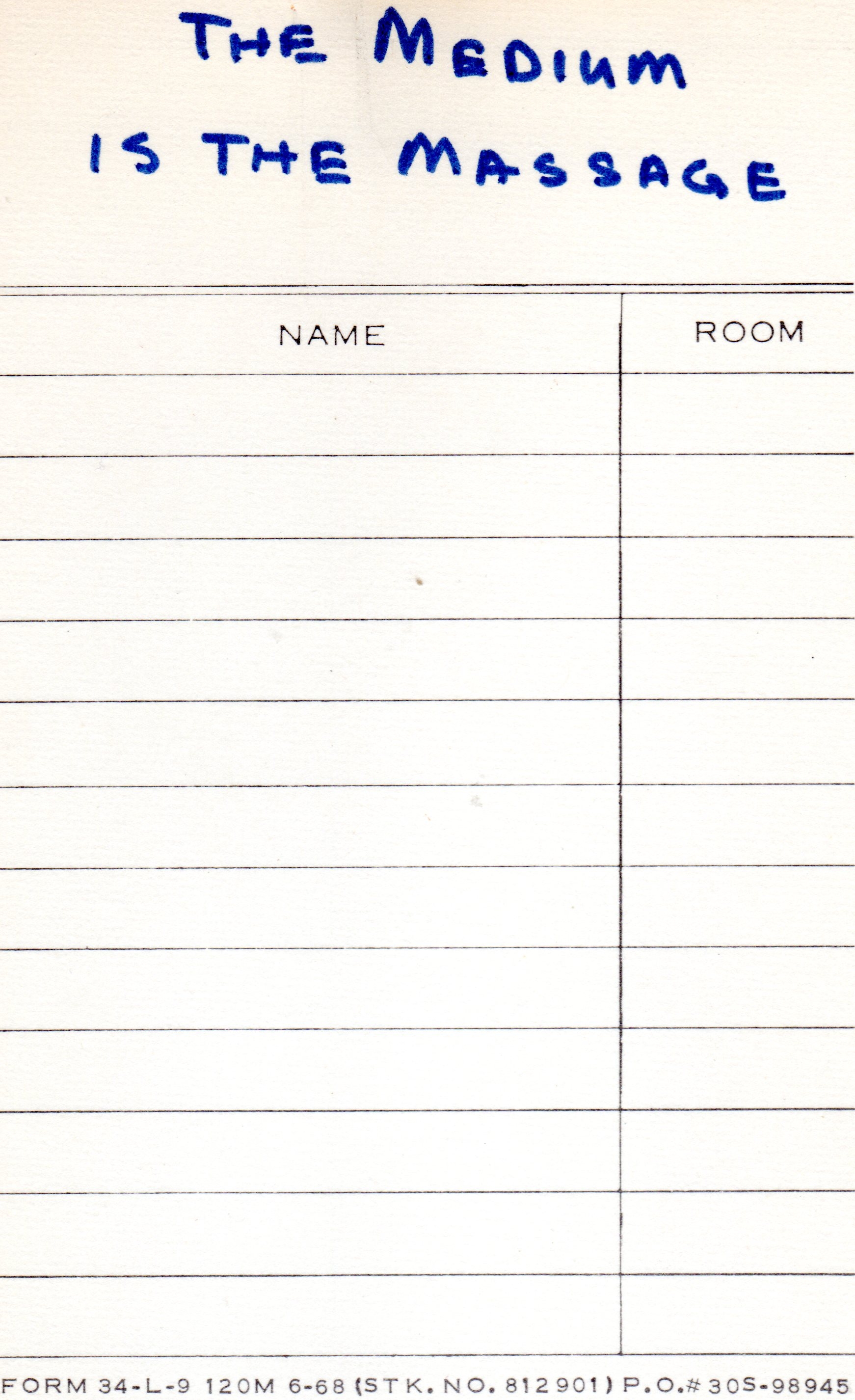 1 thought on “Book Report: The Medium Is The Massage by Marshall McLuhan and Quentin Fiore (1967)”