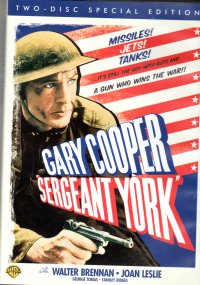 Or, “How I Learned My Boys Like War Movies”.

It started, as it so often does, with a girl.

Well, all right, not really a girl: It started when somewhere I heard Amaranthe, a Swedish metal band that includes Elize Ryd as a singer, doing a song about Alvin York, the decorated soldier from World War I. I might have come across it whilst letting YouTube run through female-fronted metal bands, but the song caught my ear and quickly made its way to my gym playlist.

Turns out, this is actually a remake of version by another Swedish band, Sabaton, who did a whole concept album based on World War I.

My oldest son has since decided the Sabaton version is better than the Amaranthe version. So we disagree on that. I had at some point posed a question to my Facebook friends: Alvin York or Audie Murphy? Both were highly decorated, including the Congressional Medal of Honor, for actions in their respective wars. But Alvin York returned home to farm and Audie Murphy went to Hollywood, so you can guess whom I prefer.

At any rate, so a couple months ago, I ordered both Sergeant York starring Gary Cooper and To Hell And Back starring Audie Murphy as himself. On election night, we watched something American instead of a Venezuelan production.

And the boys loved it. I liked it too, although the movie deals as much with York’s youth before he went into the service and his conversion to Christianity (well, his religious experience that led him to act as a Christian, including trying to be a conscientious objector). His military experience, especially the one that they’re singing about a hundred years later, is really only a coda to the overarching story.

The youngest son, of course, is happy to watch any movie with me. He’s watched National Velvet; they both sort-of watched The Iron Mask, but only the youngest might have made it through Ice Pirates with me. The oldest one is too sophisticated, too arch for simple storytelling, especially in black and white.

But this movie he stayed through. We’ve also since watched Von Ryan’s Express which is in a four-pack of World War II movies that I bought some time back. So perhaps we will soon go through that set.

We certainly won’t be watching To Hell and Back any time soon. Apparently, the disc I bought is one of the European region discs. So we cannot watch it here until such time as they make universal DVD players or, more likely, until I find a used copy at a garage sale.

The youngest was awed and asked if it really happened; the oldest was a little skeptical that it all happened just like that, so I ordered two copies of Alvin York’s diaries. One for him and one for me. I expect I will read mine first.

Oh, and I didn’t know what to make of the sampled “Ready… aim… okay, York, you’re on your own.” that appears at the beginning of the Amaranthe song. Apparently, it is from the film, where York is showing his marksmanship to a skeptical sergeant during rifle training. So I learned something, anyway.

1 thought on “On Sergeant York”