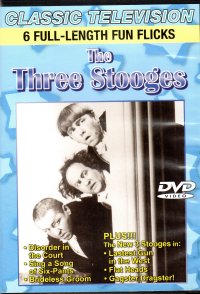 So on Wednesday, November 4, the night after we watched Sergeant York, I wanted to watch To Hell and Back with and about Audie Murphy; it was then that I learned it was the wrong region DVD. So I cast about looking for something, and I thought I would pop in this video which I got Spring 2019 at the church garage sale (I was going to say last Spring, but it suddenly occurs to me that 2020 has somehow almost passed–what have I been doing? When and where were the seasons?). I thought maybe the boys would want to watch these, but they did not.

So I watched them alone.

“Full length” is a misnomer–these are not full films, but three shorts from the 1930s and three of their cartoon programs from the 1960s.

The three shorts are “Disorder in the Court” (with Curly), “Sing a Song of Six-Pants” (Shemp), and “Brideless Groom” (Shemp). The first is a courtroom scene; the second has the Stooges running a tailor shop when a wanted criminal comes in and leaves his clothes behind with important information in them; the last has Shemp inheriting a large pile of money if he’s married by six p.m. So they have some interesting bits, and only a little bit of the slapping and eye-poking that one thinks of as the bulk of the Stooges’ humor.

The three cartoon things are “Lastest Gun in the West” about a robot gunfighter/bank robber (actually more a mech because the inventor is inside running it), “Flat Heads” about–well, I have forgotten–, and “Gagster Dragster” about the Stooges’ attempts to build a dragster for drag racing. These run about twenty minutes–they have a live action intro/outro where the very aged Stooges (Larry, Moe, and Curly Joe) do a simple bit, and then the cartoon runs about ten minutes.

You know, when I was a kid, the teachers and adults worried about us kids emulating the Stooges too closely, which seems an anachronism (thinking back about it), but I read the Wikipedia entry for an overview of the Stooges’ history. Although most of the shorts were filmed twenty years earlier, Columbia released them to television syndication in the 1960s, so they had a revival of sorts (which explains the 3 New Stooges cartoon series in the middle 1960s). So many of the educators with ten years’ experience in 1978 had probably seen some eye-poking based on the television series.

But my youngest, who can watch old movies with no problem, watched a couple minutes of one of these “full length” twenty minute episodes and called it “cringey” (which is bad in 2020).

You know, I have to kind of agree with him. Not much of this was really funny. Amusing in infrequent spots in the shorts–more an appreciation of the joke they were making than a response to it. I don’t think I really found them very funny when I was young, either, but we only had six channels on the television, and it was the best option at times. My oldest has seen some Three Stooges material as his first grade teacher rewarded the class with a little television time for something and showed them The Three Stooges. Said teacher retired a couple years ago, and his teaching career had not started when my first grade teacher was afraid I would react adversely to exposure to these comedians. Maybe he, my kids’ teacher, got a chance to warn his first students not to imitate Mork from Ork like my later teachers did.

At any rate, I am really sorry that To Hell and Back would not play in my player.

I might sometime watch a whole Three Stooges film to see how it develops, and I won’t rule out buying another compilation of these out-of-copyright dollar wonders, but I won’t sit down and watch a Three Stooges marathon on cable. I want to like Marx Brothers films, but I have yet to see one. I’m afraid that the comedy will only kind of hold up over the decades (80 or 90 years now, ainna?) unlike dramas and war movies.

But, in closing, I would like to highlight two oldies that refer to the Stooges.

The first is “Handcuffs for Houdini” by The Cutting Crew from their 1989 album The Scattering:

But when the pie was opened
They’d forgotten how to sing
There was Larry, Moe, and Curly Joe
And Martin Luther King….

And from 1993, “Everything Louder Than Everything Else” by Meat Loaf from Bat Out Of Hell II: Back Into Hell in 1993:

If you want my views of history, then there’s something you should know
The three men I admire most are Curly, Larry, and Moe

Even at the dawn of the Clinton era, Three Stooges allusions were culturally relevant. Sixty years after they hit the big screen. Less so now no matter how much they try to reboot the property. Unless they turn them into super-competent international agents whose vaudevillian acts are but a disarming cover. Come to think of it, perhaps I should try to write that….