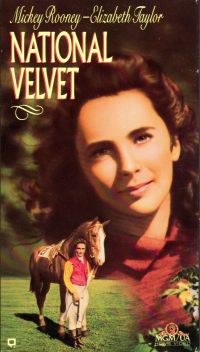 In my continuing quest (I have so many twee continuing quests this year, ainna?) to watch the old movies in my unwatched video cabinet, I watched National Velvet the other night, inspired a bit by the fact that my youngest son just read a horse book, Black Beauty. I invited the boys to watch, but one of them left early in the film because it bored him. The youngest, though, stayed all the way through and said it was okay.

It’s a horse movie and a sports movie not unlike Seabiscuit, and it moves along pretty well. The plot: A wandering young man, an ex-jockey who lost his nerve after a spill, comes to a seaside village to look up a family who knew his father. The family, which includes the town butcher, his wife, three daughters, and a young son, receive him and put him up, but he might be up to no good as he discovers where the family’s savings are hidden and takes it, but he puts it back when they offer him a job and board. Then the middle daughter wins a horse and dreams of him racing in the Grand National horse race, and the former jockey is asked to help.

So it’s got the training of the horse arc, the redemption of the former jockey arc, and basic family interactions to fill the two hours and a minute. It moves along very well, not bogging down in places.

The film looks newer than Sunset Boulevard because it’s shot in Technicolor even though it hearkens back to the recent past–the late 1920s, right after the setting of Downton Abbey.

The film features a large contingent of actors (Elizabeth Taylor, Mickey Rooney, Angela Lansbury) whom I first knew as, well, almost elderly (which is what they seemed, although in the 1970s and 1980s they would not have been much older than I am now). Angela Lansbury, for example, was quite cute back in the day: 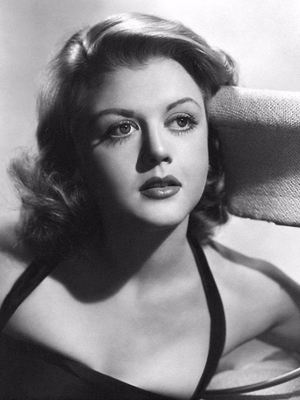 She reminds me of my beautiful wife for some reason.

This film was followed by a television series in the 1960s, a television movie sequel in the 1970s, and maybe a television movie remake in the 21st century (although the IMDB is hazy on this last, with only a title and year). In the sixties and seventies, we sure had a lot of kids with horse shows on television, some through syndication and some new material. It’s probably why the kid wanting a pony was a trope in those days. All the kids want these days is the latest phone and a paid copy of the latest billion dollar mobile game with a big budget for ephemeral in-app purchases.

Oh, and the film has a message to drive home to today’s youth, or maybe just my children: Stop playing with your orthodontic appliance and put it in your mouth. Velvet has a “plate” to straighten her teeth which cost four pounds, and her parents constantly tell her to stop fussing with it. So it’s good to see how some parental guidance remains unchanged between the movie’s setting and last night here at Nogglestead.