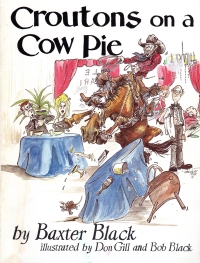 My first exposure to Baxter Black was a folksy column that ran weekly in the Republic Monitor, the weekly paper in the next town over, when I first moved to southwest Missouri. He talked about being a cowboy and humorous anecdotes about the same. However, the paper dropped the column some years ago, likely as a cost-saving move. Or perhaps Baxter retired.

Apparently, Black first became known as a cowboy poet in the 1980s, and this collection of poems and an anecdote/story or two comes from that era. They’re fun to read like Ogden Nash, but with less reliance on vernacular or funny spellings. It’s about being a cowboy and whatnot, but the topic matter doesn’t detract from the fun of it. Perhaps it adds a bit to it.

The book also features cartoonish illustrations by Don Gill and Bob Black that accompany the poems and illustrate the stories therein. They add to it.

I didn’t completely browse this book during football games because I came to a block of prose that looked like a short story, but it was really just a page of prose amid the lyrics. Still, it’s off my sofa-side table.

And if I run across more of Baxter Black in the future, I’ll be sure to pick it up.