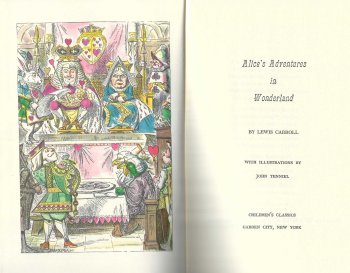 I am continuing my, well, I would call it a march through the children’s classics that I have in the Children’s Classic series (such as Hans Brinker, Black Beauty, and Heidi). Given that I’ve only got four or five in the set, it’s a pretty short walk indeed.

You know, I started reading this book to my boys when they were younger, but we didn’t get very far–Alice did not even make it to Wonderland before we put it aside. I passed the bookmark where we’d left off, and Alice was still in the hallway.

So if you don’t know the arc as it were, Alice is out with her sister one day, and she follows the rabbit with the pocket watch down a rabbit hole that leads to a hall with a door to wonderland. She has some adventures in the hall before getting into Wonderland proper, and then she gets right-sized to go through the door into Wonderland, where she meets the royal court of cards and whatnot.

They’re simple, kind of silly little bits of whimsy, but when you stop to think about how many tropes and allusions to the stories one knows without having actually read the book–I mean, I knew about the bottles changing Alice’s size, the cards and the Queen saying “Off with their heads!”, and the white rabbit with the pocket watch amongst other things. Maybe I saw parts of the cartoon when I was a kid or read a kid’s book about it when I was actually a kid. One wonders if anything by Dan Kinney or Dav Pilkey will have similar cultural reach. The books about today’s current thing written to teach kids the current party line certainly won’t.

You know, I actually flagged something in the book. It must have been the time Alice used a gun chambered in something other than the ammo she purportedly used. Let’s open the book and see:

‘Never imagine yourself not to be otherwise what it might appear to others that what you were or might have been was not otherwise than what you had been would have appeared to them to be otherwise.’

That’s advice from the Duchess to Alice, and I think they’re words to live by.