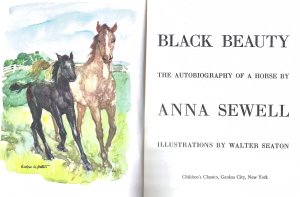 This volume is part of the mid-20th-century Nelson Doubleday Children’s Classics series (as were Hans Brinker and Heidi). As I have previously mentioned, I bought these books before I had kids and missed the chance to read them to my boys when they were young enough to be interested in children’s books. So I’m working through the volumes in the set since I read Hans Brinker for the 2022 Winter Reading Challenge.

I could have read this book for the Winter Reading Challenge as well as it had a category of non-human main character. I thought this book would be one of boy or girl and his or her horse books that were quite the rage for a while. Also on television–I remember Fury in syndication, and My Friend Flicka somewhere. I know when my aunt gave us her kids’ books that we got a couple of entries in mystery series along with kid and dog or kid and horse books. I never got into the genre when I was younger. I lived in the city, man; I could not imagine having a horse of my own.

But this book is told from the horse’s point of view. Black Beauty, the horse, although he later becomes known by different names, starts out with his mother romping in a pasture. He’s sold to nice aristocrats and enjoys his younger years, but when the wife takes ill, he’s sold to another set of aristocrats who favor a bit that pulls the horse’s head up (the book rails on this bit a lot), and then he ends up getting sold into different sets of circumstances and manual, or equine, labor, from pulling a cab to pulling freight and finally ending up an older horse sold at a down-market horse fair to a farm looking for a cheap horse, and he’s reunited with a groom from the olden days and lives happily ever after.

So it’s got a bit of a be-kind-to-your-horses message to it that must have been ahead of its time. But for its brevity–it’s 124 pages–it took me a while to get through it because I’m not much of a horse person, and the novelty of it being nominally from the horse’s perspective was not enough to draw me along when the prose really didn’t.