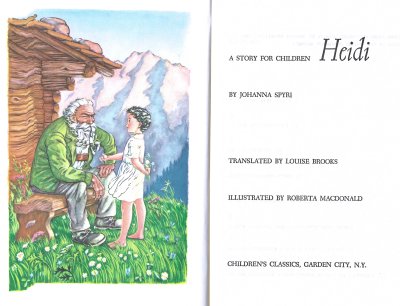 I know, I know, I know; a couple weeks ago, I posted that like others, I haven’t read the Harry Potter novels because they’re for kids. But here I go again, reading a nineteenth century children’s book (like Hans Brinker, or the Silver Skates or the Little House books or Me and My Little Brain) and thinking that makes me better than those who draw lightning bolts on their heads, wear robes, and cosplay.

If you don’t know the plot because you grew up after this book was popular for children, that being in the latter part of the 20th century and beyond, the book deals with a five-year-old orphaned girl whose aunt took care of her for a while after her mother died, but the aunt has a job offer that does not allow for childcare. So the aunt takes the girl to her grandfather’s shack high up on an Alp and leaves her there. The grandfather is a bit of a hermit and a bit of a curmudgeon, but he warms to the girl and reintegrates into the Swiss village a bit. During an interlude, Heidi’s aunt gets her a job as a companion for a rich invalid girl, and Heidi enlivens the household–although she upsets the ways of the household help already in place. When she becomes depressed from being away from her mountain, the rich household sends her home, and in turns they come to visit her and enjoy the fresh mountain air. When Klara, the “invalid” girl, gets a couple months of rich goat milk and mountain air, she is strengthened to the point where she can walk.

So, basically, it’s Punky Brewster in 19th Century Switzerland–although Punky Brewster is better described as a 20th century Heidi in an American city with a dog instead of goats.

I bought this book with a number of others in the series–Hans Brinker, Black Beauty, 20,000 Leagues Under the Sea, and Alice in Wonderland among them. I think I bought them before children, and I never did read them to my boys when they were young enough to listen to their father at all, much less for hours. So I’ll read them now–and never mind that they’re young adult books. They’re classic literature, you see. Don’t you?