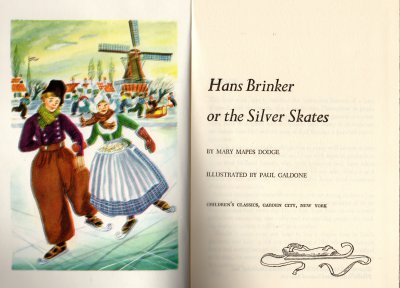 As with Laura Ingalls Wilder’s The Long Winter, I read a nice cold winter story in winter, which means I put a couple extra logs on the fire while reading. The 2022 Winter Reading Challenge has a Young Adult category, so I picked this up–I have four or five other young adult books from the Children’s Classics series that I will probably knock out later in the year just to move them en masse from my to-read shelves.

You know, I think a copy of this books was amongst the children’s books that my aunt gave us when her stepchildren outgrew them. Not this copy, though–if it exists, it’s on the shelves of unread children’s books in our family room. My boys have probably outgrown that collection, composed of books from my beautiful wife’s childhood and my childhood that the boys really didn’t cotton onto. They did not get into Hardy Boys or similar boys’ adventure books. But I digress.

Hans Brinker is a peasant boy in Holland. His father used to work on the dikes; the union’s been on strike, they’re down on their luck, it’s tough. Wait, no, that’s someone else. Father Brinker did work on the dikes, but he took a fall and has been insensible ten years by the time the story opens. Hans does some odd jobs; his sister tends geese. The well-to-do kids look down on them, except for a couple of good-hearted kids. Before the father went to work on the fateful day, he did something with the family savings and came home with a mysterious pocket watch that he would explain later–but he couldn’t. A local well-to-do family decides to hold a skate race with a pair of silver skates as the prize–but the Brinker children only have handmade skates with wood runners instead of blades.

I mean, that’s the story as it’s laid out. The first sixty or seventy pages set this up, and then we get 150 pages of the boys not named Hans Brinker deciding to take a trip skating to visit Amsterdam and The Hague, so they do. They go off, skating the canals, and they visit a hella lot of art and history museums and talk with a visiting English boy about Holland. Which is what teen boys do. When written by an older woman.

After the long interlude, we return to the title character. A noted surgeon performs brain surgery on the father right there in the hovel, where the father recovers in a matter of days. The family finds their savings. The mystery of the watch is solved–it’s from the son of the surgeon, who fled after fearing he’d accidentally killed someone working as his father’s assistant–and he ran off to be a successful manufacturer in England. He returns, Hans becomes the surgeon’s assistant, Father becomes the foreman in the surgeon’s son’s new Dutch facility, and everyone gets enough to eat.

Oh, and the race: Gretel wins among the girls, and Hans withdraws, giving a piece of his equipment to help one of the other boys. We get a little bit about how the characters grow up and grow old, and finis.

So it’s as much a book designed to educate young’uns on Holland as to tell a story. The narrator sometimes shifts into first person plural, especially trying to create excitement during the actual race, so it’s a bit strange, too. Children’s literature was such a strange thing back in the olden days, ainna?

At any rate, another category down in the Winter Reading Challenge. You know, I rather like the gamification of my reading in the first months of the year–it’s more interesting and exciting to me than the things with which I finished the year last year, anyway.