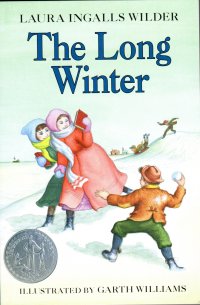 It’s been since July that I read By the Shores of Silver Lake, and I picked a good time (December) to read this book. It deals with, well, a long winter that the Ingalls family endures in North Dakota with blizzards every couple of days.

The Ingalls family has become more urban, as they move from their claim shanty to the building in town that they built and leased at the end of By the Shores of Silver Lake. They depend upon regular deliveries by train of coal and food, and the trains run intermittently and then stop until the spring which pushes the town to the brink. They have to eat some of the Wilder boy’s seed wheat. They have to twist and burn hay when the coal runs out, an effort that requires almost around-the-clock effort. And Almanzo Wilder and another young man make a desperate bid to find a farmer some miles from town that, rumor has it, laid up a lot of wheat that he might sell.

The book reminds us acutely–again–how throughout much of history, just living was a struggle. A perspective lost if our schools replace historical books with theme-of-the-day morality plays that emphasize made-up drama for Man versus Nature storylines.

At any rate, I’m not saying the book influenced me, but I built a wood fire one night while reading it (because wood burns hotter than Duraflame logs). And the day’s high was something like sixty degrees, so I’m not actually really cold. But reading about how they broke the ice on their indoor water pail in the mornings makes me shiver when I’m out of bed before 4am when the forced air heating kicks into day time temperatures.

I guess I’m running out of these books. I bought the rest at ABC Books recently and likely will finish them next year. At which point, I guess I’ll have to find some adult books to read or something.