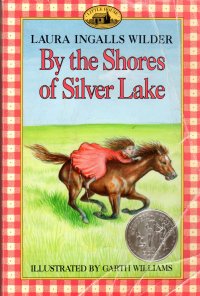 When I read the preceding Little House book, On the Banks of Plum Creek in March, I predicted I’d read the next volume (this one) by summer. I missed that prediction by a couple of days.

You know, as the series progresses, the narrator (“Laura Ingalls,” a lightly fictionalized version of the author) becomes more sophisticated. In this book, she’s on the edge of thirteen. At the onset, the family is still in the house on Plum Creek. The mother (Caroline), Mary, and Carrie suffer from scarlet fever (which has made Mary blind). Relatives from Wisconsin pass through; one of the uncles has a job for the railroad running a grading team at the edge of the railroad construction. The uncle offers Charles a job running the company store with a salary and everything, and Charles takes it. So he goes on to join the railroad workers in North Dakota, and the ladies are to join them when they recover fully.

They get to ride on a train, and Laura has been tasked with describing the scenery to Mary as they pass. They meet with the workers’ camp as it’s being dismantled to move to the shores of Silver Lake, and Laura reconnects with her cousin Lena. The family moves to and they arrive at the shore of Silver Lake before the railroad camp arrives to meet them.

The book explores the environs around Silver Lake. Charles hopes to stake a claim to a homestead, and they find a spot. When the construction workers finish for the year, the camp disbands in the autumn, but the Ingalls get to stay on in a finely constructed and comported home used by the surveyors. When spring comes, a rush of homesteaders appear, and it’s only by the intercession of a previous acquaintance that allows Ingalls to beat some competitors to the claim office to ensure he gets the patch he wants. Then he stakes a claim and builds a building in the suddenly developing town of De Smet, which is constructed seemingly overnight.

As I mentioned, the book’s narrator is more sophisticated; we see some indications, as we did in On the Banks of Plum Creek, that Charles Ingalls is a bit of a dreamer, willing to give up what he has with a chance at something better (which does not always work as planned). Caroline is not so much a “Yes, Charles,” believing unalloyed that everything he does is the best possible decision–there’s a little resignation and acceptance demonstrated. And the stories are moving from the rural/wilderness to the urban landscape. With the next books, they’ll be living outside of town (kind of like in the television show), and I expect that the stories will be more centered on small town life and farming. So they’ll come to align with the stories from John D. Fitzgerald (The Great Brain series) perhaps.

At any rate, I’m still enjoying the series, and they’re quick enough reads when I am trying to pad my annual stats so I don’t have to resort to coloring books (given that this is the 56th book I’ve read this year, I think I’m in good shape). I don’t have the next volumes in my library, so I guess I’ll suspend reading them until such time as I find them on the old childrens’ books shelves (technically, not my to-read shelves) where I collected books I thought my boys might like to read–but they didn’t. In their defense, I got most of them from my aunt when I got Captain’s Courageous, and I didn’t read them either. So maybe I should count them as to-read shelves since it took me almost two years to read Captain’s Courageous, and I’m apparently not above reading children’s books now.