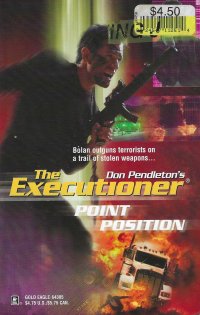 Gentle reader, this is the last of the Executioner books on my shelf. Alright, alright, alright: I do still have SuperBolan books, Able Team Books, Stony Man Farm Books, and Phoenix Force books. Still: I got my first Executioner novel in 2007 and read it, Panic in Philly, later that year. I got the books in big chunks: 47 books in the 2011 as a birthday present from my beautiful wife and at the Friends of the Clever Library book sale in 2013. I have not counted, but I have probably read nearly 100 of them from #3 Battle Mask from 1970 to #373 Code of Honor from 2009, which I bought new in the grocery store (and, briefly, was caught up on my Executioner novels until I received the birthday gift that week). So, overall, it’s been a mostly enjoyable experience. But onto this book.

This book comes seven years and 83 books after the previous book on my shelf (Blood and Fire). The books are still 220 pages, but unlike the two previous, the title has no real relevance on the plot or action. Bolan is on the trail of some chemical weapons, and he has to team up with two mercenaries who are out to find and retrieve an even more frightening weapon–a sonic weapon that can immobilize people within its radius and make them forget years of their lives. A couple of set pieces later, and Bolan triumphs, of course.

I flagged a couple of things:

A jab took the man in the chest, the power of Bolan’s forearm and biceps muscles driving his adversary backwards.

C’mon, man, the biceps muscles handle moving things towards the body, not extending the arms. That’s the triceps job. And much of your punches, including jabs, should come from twisting your hips, not just using the arms.

Well, okay, I flagged one thing. But it’s interesting to note that in 2004, the terrorists are all right-wing groups even in Executioner novels. No more Marxists or Communists. Which probably makes this a good place to stop with the Executioner novels. If even the Executioner books start trending toward the political, I might not ever read another piece of fiction from the 21st century. Which is probably not true, but still.

At any rate, the jump ahead seven years from Blood and Fire to 2004 saw great changes in my life. In the interim, I had gotten married and gotten started in a career in technology–and I’d even made my mostly final move to quality assurance from technical writing. In a couple of months, I would start my own company to bill as a consultant, something I’ve done for the most part since. And in short order, my aunt would pass away, leading me and my beautiful wife to consider having a family, which, clearly, we have (and we’re almost done with these days). Of course, I’ll be going back to other series in the Bolanverse, so I’ll still get to relive the time in my life where I was when the book was fresh. I don’t do this with normal books, but with the Bolan books, I have. Probably due to the monthly subscription nature of the series.