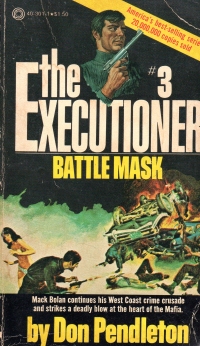 This book is the third in the Executioner series and the earliest I have (and one of the last I got). In it, Mack Bolan is fresh from his big LA expedition that left his team dead or in jail, and he’s still in California. He turns to an old army associate to give him a new face as the old one is widely known. The Mafia catches wind of his plans and learns where he went, but not before Bolan infiltrates the local den as a freelance headhunter looking for Bolan.

It’s standard fare, pretty good for the Pendleton books. It introduces Hal Brognola to the series. It has events that later books refer too–and most of the later books refer to the events of these first few books a lot, and then the later books a little. I wonder what Pendleton must have thought about these books and series and how long they would have gone on. Could he have expected to write thirty-something of them over a decade? It might have made these early books a bit tighter in their universe. Or maybe I’m making that up.

At any rate, one more down, seventy-seven (of the Executioner series alone) to go.