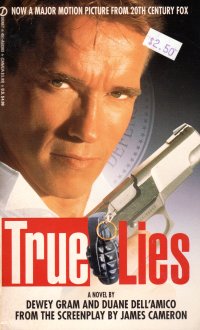 I don’t remember if I saw this movie in the theater in the middle 1990s–I think I saw it first on videocassette–but I remembered the whole plot and most of the scenes. I remember I tried to watch it in the early part of this century, but I had to pop the VHS tape out as the attacks on September 11, 2001, were too fresh for me to enjoy a film that features a nuclear detonation in the continental US. I have since watched it, though, and in continuing with the theme from this year, I read this book, the novelization.

The book is a cut above many novelizations as the authors include some interior life to the characters instead of just reporting the action in the script or in the movie. As such, the book is a little deeper than the film, and the insertions keep the playful tone of the movie itself. It’s not like when they made Serenity after Firefly and suddenly all the characters were darker and haunted instead of happy-go-lucky.

If you’re not familiar, the story follows a secret agent with an agency that tracks nuclear weapons and threats. He has a wife and a daughter that he sees rarely as he is called away often for his computer job cover story. He has a set piece in the Alps, and an Islamic terrorist from the set piece follows him to try to kill him to protect the terrorist plot to smuggle nuclear weapons into the United States. Set piece, set piece, comedic subplot that the wife is getting bored and a used car salesman has crafted a secret agent story to seduce her, set piece that the daughter is acting out, set piece, nuclear detonation, Harrier jump jets (remember when they were a thing?), one-liner, happy ending.

Spoiler alert. There is a nuclear detonation in this film. But I guess I already mentioned that.

So, a pretty fun book with some minor variations from the film–the last voice over by Harry’s handler that ends the film is missing–but no great differences, so this is from a fairly late draft or early cut of the film.

A couple things I noted below the fold.

Avocado-Colored Technology
I once wrote an article that appeared in a national magazine, Writers Journal, (okay, a small national magazine) about how to avoid dating your written work with current technology. Sure, it looks gee whiz now, but it ages badly.

This book, and the movie, had a few things that make a modern reader recognize how old the book is:

Not quite as bad as Mission: Impossible was, though.

Also, the slang carbon-dates it to the early 1990s:

Faisil still jacked in and hacking, had heard everything over his headset. “Schweeng,” he said.

The author must not have been familiar with Wayne’s World, where the preferred spelling is schwing (and it means the sound of a sudden erection in the presence of a pretty woman). It’s probably included because here it refers to Juno, the art dealer played by Tia Carrere who appeared in the Wayne’s World films and probably had Wayne say this about her.

Fun fact: I have thought about watching this movie with my boys, but before hand, we would watch Wayne’s World first to confuse them why Cassandra turns bad.

“She knows not to steal,” said Harry, unappeased. “We taught her better than that.”
“Yeah, but you’re not her parents anymore. Her parents are Axl Rose and Madonna. The five minutes you spend with her every day can’t compete with that kind of bombardment. You’re outgunned, amigo.”

Twenty-five years later, the children can carry YouTube and TikTok stars in their pockets and watch them even more ubiquitously than the aforementioned stars. It’s a real struggle to keep my boys engaged in the real world instead of the mirror-world of the electronic metaphors.

Also note that Axl Rose and Madonna are not as dated as “modem,” but they’re close.

This bit differs slightly from the film:

Brraaaaat! People screamed and scattered as Gib ran behind a light polr not quite wide enough to protect both his ass and his beer gut. A hail of slugs clanged off the pole as Gib vacillaed. He decided to sacrifice his ass for the greater good, closed his eyes, and gingerly stuck it out. A slug took out his wallet, and he instinctively pulled in, exposing his belly–a slug opened his shirt, another sliced his tie in half. Gib realized this was a poor choice of cover.
“Wrong! This is not good!”
But Aziz suddenly turned and ran. Gib couldn’t believe his luck. He kissed the pole.

Here’s how it appears in the movie:

A slight variation, but one you’ll notice if you remember the movie.

“You know what, Harry?” said Gib, stitching the purse’s leather back up. “I think you’re going about this whole thing all wrong. See women, they like you to talk to them. You know? And maybe the problem is you’re not in touch with your feminine side.” Gib snipped the excess thread and looked up at Harry. “You know I have been watching Sally Jesse Raphael–“

You know, in the 1980s, I watched more Sally than Oprah, but probably more Geraldo than both. I still have a videocassette with Geraldo getting his nose broken by a skinhead.

And then, his parents were murdered. The Marines who killed them blamed it on the “incontinent ordnance” sprayed from a Cherokee assault copter during a firefight with Christian Phalangists.

This is one of the second books I’ve picked up recently where the civil war in Lebanon plays a role (Supercarrier being the other one–strange how certain locations repeat in books I read, like when I read two books set in Egypt in February, The Judgment of Caesar and A Ginger on a Mission). But I digress.

I meant to point out that there is no Cherokee assault copter.

I’m not sure whose mistake this was; although this book was written before the Internet, certainly the library had a copy of Jane’s something or other to give the proper Indian name (or Cobra).

Depth to the Villains

The book adds depth and backstory to the main villain Aziz in describing the death of his parents (above). Another minor (but named) villain quotes remembered poetry:

The highway stretched over the ocean as far as Ackbar could see. A pale, gray edge of the coming dawn lined the ocean ahead and to his right. He dimly recalled a fragment of a song almost a thousand years old:

Awake! For Morning in the Book of Night has flung the Stone that puts the Stars to Flight…

Spoiler alert: It’s The Rubiyat of Omar Khayam, so it’s not especially obscure. But it’s not in the movie.

Still, a fun book to read. Better than a modern thriller, I suspect, because it doesn’t take itself too seriously and also because it’s bound to a two hour movie script which limited its scope to a pleasant quick read and not five hundred pages of double-crosses and gun mistakes.

I am also pleased that my reading this book has not triggered any sympathetic magic events in the real world. Yet.