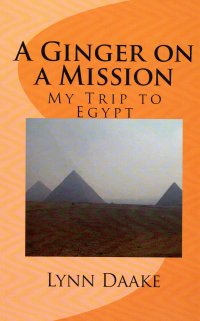 I bought this book at an undocumented trip to ABC Books (sometimes, as I mentioned, if I only end up with one or two books, I don’t make a special Good Book Hunting post for it since the hunting, in those cases, wasn’t particularly good). I spotted it in the local author sets, and I asked Mrs. E., the proprietrix, if it was Mama Daake. We know the Daakes from church, and the younger Mr. Daake, whose children received our boys’ Mega Bloks collection and still receive odd Mega Bloks from time to time when they turn up at Nogglestead, is not married to Lynn. So I thought it might be his mother, but, no, it’s his sister or sister-in-law. So bear that in mind, gentle reader: I know the family, and younger Mr. Daake is very large; although very good natured, I would not want to give him offense by savaging his sister or sister-in-law’s book.

With that disclaimer out of the way: The book is what it says it is. The subtitle is My Trip to Egypt, so it’s essentially culled from her diary/journal of a two week mission trip to Egypt. Daake is not a professional writer, so really the text is a bit of a cleaned up version of a journal which focuses on the travel aspects of the trip and the siteseeing a bit with only a little description of the mission work (cleaning up a park in Hurghada). You get some detail about the work, but a lot more of the time is spent on where the group is going in their non-work time, the souvenirs they seek, what they’re eating (a lot of Western chain restaurants), and impressions of the city. Also, a quest for hairbraiding.

So. It was a fairly quick read, the first thing I finished since finishing the Winter 2021 Reading Challenge (this book could have fit into the In a Different Country and Memoir categories). It doesn’t go into a lot of detail, it’s not particularly spiritual (although it does cite scripture a couple of times). So it kind of fits into the normal person biographies that I tend to read, but this one is contemporary.

I do wonder, though, how much of mission tripping is mission tourism industry, though. I mean, they paid money to go to a tourist city on the Red Sea to work half days on a project not directly tied to a sister church–although they do an activity with a local Coptic church and attend a service or two with them. They’re not directly proselytizing but just setting an example. So whether they’ve brought anyone to Christ through their example is uncertain–the author would like to think so, but I’m from a wee bit more cynical world.

At any rate, it’s the second book recently I’ve read set in Egypt (the other being The Judgment of Caesar). Which might have been why I jumped on it so quickly.

I also flagged a couple of things for comment.

The final dish was a beef dish. It had beef made three different ways. One was an interesting site [sic]. They [sic] way that it is made is that the beef is ground into a hamburger consistency and seasoned. Then it is formed around a shish kabob skewer and grilled. When it comes off the skewer and served, it looks like a piece of dog dookie with a hole in the middle of it. I think I was the first one to try it because of its visual appeal, and it actually tasted pretty good.

Strangely, I have recently been thinking of the word dookie. When I was growing up in the projects, it was the slang term of choice for human scat, but it’s not one that my boys have been exposed to–certainly, I don’t tend to use it any more. Then, I was thinking perhaps it was the word duece pronounced incorrectly originally. Of course, I didn’t search for it on the Internet, because, c’mon, man, that will not be good for my appetite ahead of my next meal and for the kinds of ads I would see for the rest of my life.

But sometimes I spend perfectly good brain cycles during the day thinking of things outside of Philosophy.

Shared Mall Experience
While visiting a mall, she notes:

You can even drop your kids off at Magic Galaxy where they can ride a roller coaster, drive bumper cars, or play with over 90 video games while you spend your time shopping. On the 4th floor there is a little tram where you can drop off your kids to ride the tram while you are shopping.

Although the local mall’s arcade does not have that many video games, for a while, it did have a little train that would ride around one small segment of the mall. We used to have our car serviced at the shop by the mall, so I sometimes took my boys up there and we would walk around the mall while we were getting the cars’ oil changed. So we rode on the train a couple of times during its brief presence at the mall. Since we were the only ones who rode it that I ever saw, it did not last long.

I’ve Seen Photos From Other Angles

Seeing the signs meant, “yes, we’re really are going to be able to not only see the pyramids but touch them, and even go inside one”. Then, all of a sudden, there they were. We rounded a corner and the pyramids came into view. They were majestic and stood high above the city buildings.

As we started to drive away from the Sphynx and pyramids, Rafik told us that we would be headed to lunch. I was expecting to drive into Cairo to the mall, but we didn’t. Instead we pulled over right across the street from the pyramids. We were eating lunch at a KFC/Pizza Hut in Giza.

Juju and I bonded over martial arts and kickboxing. He showed me some of the moves he knew, and then I taught him a few more. We were having a blast throwing kicks and punches in the middle of the mall while our friends were shopping.

This is true in life: When you find out someone studies martial arts, particularly another type, you ask to see something that you can try out on the people in your school. Or, if you’re like me, you read a pile of books on it to learn dirty tricks.

Vanda called Mariette and told us that their block had no power. Ish! We all laughed and decided it was an Egyptian sendoff. We didn’t have electricity when we left Hurghada, and new we weren’t going to have electricity as we left Cairo.

At any rate, again, an interesting book. I enjoyed it and learned something, but it’s not a professional work, and if you’re not used to that, you probably won’t enjoy it as much.