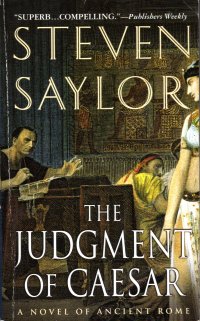 It’s been six years since I read Saylor’s Last Seen in Massilia. I bought a bunch of these at a garage sale or something, and when I read Last Seen in Massilia, I had them together on the bookshelves, but I had put the first two I owned of the series out of order. Since then, the shelves upon which I’d put them in order collapsed, so they have kind of been just piled onto the remaining bookshelves. When it came time to find books to fill out the Winter 2021 Reading Challenge categories, I grabbed the Saylor book that was on top. This one.

It takes place well after the events of Last Seen in Massilia. After Caesar defeats Pompey. Gordianus, the protagonist, is returning to Alexandria, Egypt, with his wife, a native of that land, as well as his two adopted charges and the hulking mute brother of Gordianus’s recently deceased lover, whose ashes she wanted spread on the Nile. As they see the light of the Great Lighthouse at Pharos, a storm comes up and blows their ship into the remnants of Pompey’s fleet. Pompey hates Gordianus (Caesar is not terribly pleased with him, either), and he looks forward to executing the Finder (Gordianus’s nickname) after he returns from the shore expedition where he (Pompey) hopes to ally himself with the Ptolemeic royal family–but Pompey is assassinated before he reaches the shore.

The Egyptian fleet chases off the remnants of Pompey’s forces. Caesar arrives, and Gordianus finds himself caught between Caesar, Ptolemy, and Cleopatra in their various intrigues.

Basically, I thought the book was going to just come down to a historical intrigue book and not something hinging on a crime, but on page 209 (of 323), one of Cleopatra’s food tasters dies from drinking poisoned wine that she and Caesar were going to share, and suspicion falls on Meto, Gordianus’s adopted son who went missing in Massilia and whom the Finder disowned at the end of that book for throwing in his lot with Caesar. So Gordianus leaps into action to try to find out who really did it. Which he does in the back quarter of the book.

You know, I couldn’t help but think that this book is just like The Good Girl’s Guide To Murder (I mean, they even both came out the same year). The first half of the book deals with familial relationships, the pressures of mothers/daughters and fathers/sons (respectively), and the reader expects a crime but gets a lot of rumination until, yes, there it is, somewhere in the 200s, something happens (a murder/attempted murder). Then, very quickly, the protagonist solves it without an awful lot of legwork. You see? Exactly the same.

Except that this book has a lot of flourishes of interesting historical locations and events, even basing some of the dialog on things recounted in Caesar’s account of the Civil War (which I read not long after Last Seen in Massila). So it’s more relatable to me than the McBride novel.

Which is good. I have several others in the series hidden in the piles on the to-read shelves. Hopefully, it won’t take me six years and a prompt from a Winter Reading Challenge to get to them. But one thing I have recently rediscovered is that I have a lot of really cool books to read, starting with the partially finished David Copperfield (which I paused early in January so I could get a coffee cup from the library’s Winter 2021 Reading Challenge.

Oh, and things I marked:

I Feel Smart
The book talks about Crassus, the other part of the first triumvirite.

Pompey was not her first husband. Her previous marriage had been to Publius Crassus, the son of Marcus Crassus, the lifelong rival of Caesar and Pompey. When the elder Crassus set out to conquer Parthia some five years ago, he took his son with him; both perished when the Parthians massacred the invading Romans.

I am listening to an audio course lecture series called History’s Great Military Blunders and the Lessons They Teach; one of the lectures is on the battle at Carrhae. So by the time I read this, I could talk about that particular battle in detail.

“I am a slave–of Isis. I serve the goddess and belong to her completely, body and soul, in this world and the next.”

Yeah, me, too. That’s what I get for naming a cat Isis.

Not a lot marked here, but what am I going to complain about, the description of Alexandria? I will say of the two Civ IV Great Wonders from Alexandria, I prefer the Great Lighthouse to the Great Library.