I have already told you the story of the Easter Chewbacca (which Chimera successfully knocked behind the clock, so it resides there to this very day, and the Easter tie (which I did wear to church this morning).

Now, the story of the Easter bucket. 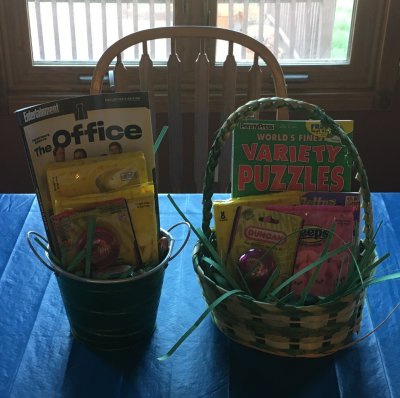 I got some stuff for Easter for the boys this year. Last year, Easter fell right after the lockdown, and I was still limiting my trips out of Nogglestead, so I didn’t get anything for the boys. And the gap gave me time to forget that we had discarded the old Easter baskets from years before because my boys had beat each other with them between the holidays.

So when I went out to look for the baskets in the garage last night, I only found one that had been part of another Easter disbursement of some sort.

So I used a decorative bucket instead for the oldest.

They’re old enough to buy their own candy year-round, which they do whenever they have money in their pockets and the weather allows. So they only got a couple peeps and a couple of chocolate eggs, a magazine or two each, a tin of Altoids, and a yo-yo. Most of the candy is likely eaten except for a tin of Altoids which has already been spilled.

And the Easter Bucket might just become a tradition. I mean, the oldest only has three more Easters, so it doesn’t make sense to spend a couple of dollars on one at this late date.

So another, albeit brief, strange tradition is born.