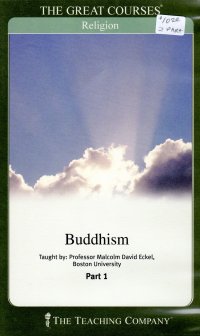 As I mentioned, I got bogged down listening to this audio course, one of the longer, 24-lecture series (although, yes, I know some courses go even longer yet). I mean, I think I skipped the last lecture in the first part (it comes in two binders, as two sets, as library editions do) because I was so excited to finish the first part that I stopped and ejected the CDs from my automobile when I finished the first lecture on that CD (these are 2 thirty minute lectures per CD). Then, I loaded the next set in the car, listened to the first lecture on the second set (“Buddhist Philosophy”) before pausing for something more exciting (History’s Greatest Blunders and the Lessons They Teach). Then, when I finished that course, I reloaded this set and inadvertently listened to the penultimate lecture (“Zen”) because the audio system played the sixth CD, the last one loaded, first, and I realize that I’d skipped a whole 10 lectures until he said the next lecture was the last one, at which point I listened to the 13th (“Buddhist Philosophy”) again and hoped I hadn’t listened to two or three lectures I would have to repeat to get back to where I paused.

All this is made possible by the scope of the lecture series and by Buddhism itself. This course provides a very, very high level overview not only of the history of the Buddhist traditions but also some insight into their thoughts and philosophies as well–and over the course of 2000 years or so and introduction into several different Asian cultures produced a great variety of different religions all called “Buddhism.” I mean, you go from emptying yourself to escape the cycle of rebirth in what is essentially an off-shoot of Hinduism to Celestial Buddhas and Bodhisattvas that are akin to angels to a full on there is one omniscient and omnipresent Buddha that you can pray to, and Siddhartha was his earthly avatar. You know, these are not the same, but they’re all in “Buddhism.” It’s as though you would take all the Abrahamic religions along with all their various denominations and heresies (unpunished) and call them a single thing.

To be honest, the firehouse of information, delivered in a low-key manner, and the foreignness of the names involved (I could not visualize the name Avalokoteshvara, for example, which makes it harder to individualize the thinkers or Buddhas) means most of what I heard won’t stick with me–but it is a survey course. I have the two course books set aside for light review later, but I suppose if I wanted to really study Buddhism, I would have to pick a flavor and dive more deeply into it. But, honestly, as I mentioned, the ontology (ontologies) don’t really speak to me (although does any ontology make sense without belief?). Most people who get into it, I suspect, are looking for the calming and practical aspects of meditation and mindfulness. Zen, one of the less ontologically focused strains of Buddhism, is good for this.

At any rate, I have another two-part course on Buddhism that I picked up last September, so I can do some A/B testing comparing the two courses except I probably won’t get to the other course any time soon since I still have most of that stack of courses awaiting me, and the next book sale is coming up in less than a month, and I hope to score some more courses in diverse subjects then.