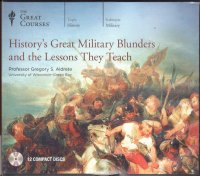 I borrowed this set of lectures from the library because I was getting bogged down in the Buddhism lecture series I popped in to break up the Great Masters of music biographies I’d been listening to (and which I’ll be listening too again, and more, as I received others in the line for Valentine’s Day and for my birthday last month).

Purportedly, the point of the lectures is to study these stories and analyze what causes great military failures, and they boil down to a couple of obvious things: Failure in planning, failure in execution, overconfidence, unclear orders, unclear chains of command, lack of cooperation between rival commanders or branches of service, failure to adapt to conditions, failure to recognize failure and to cut the losses.

But, really, come on. It’s really an excuse to talk about battles in history. The aural equivalent of coffeebook tables about war. Something to browse with one’s ears whilst driving the kids to and from school. And, to be honest, I kind of get to my boy’s school early for car line/to pick the other up from activities so I can listen to lectures like these. Lectures on Buddhism–eh, not as much.

It’s a broad sampling throughout history which kind of gives one some reminders and/or insight into different epochs. I mean, I was familiar with Custer’s Last Stand and the Charge of the Light Brigade, for example, and I have a contemporaneous book about Napoleon’s incursion into Russia that I might want to dig out and read. As I mentioned, the battle of Carrhae was mentioned in The Judgment of Caesar, so I felt smart knowing it from these lectures before I read that book.

Each lecture gives a bit of the history leading up to the battle followed by the battle itself, so each is a self-contained narrative that holds together individually. One thing that struck me, though, is that each of the stories is about groups of people in conflict, but in the lectures on Americans vs. Native Americans and Europeans vs. Africans (Isandlwana and Edwa), the lecturer took time to offer judgment against the Americans or Europeans for their policies that led to the battle. I don’t know if the judgment was lighter in other lectures or if I have just turned into one of those bean counters in the 21st century. But here we are.

At any rate, a fun, informative listen that really didn’t make me a better student of military tactics or strategy. All I know is that some of those poor bastards were doomed at the outset of their maladventures due to very poor planning on the parts of their leadership. Which makes some of these stories tragic more than heroic.

But enough of the fun stuff: it’s back to the Buddhism for me.

1 thought on “On History’s Great Military Blunders and the Lessons They Teach by Professor Gregory S. Aldrete (2015)”