235 I’d like to recommend “Pugilist at Rest”, by Thom Jones. This book was a finalist for The National Book Award in 1991. The book is actually a series of short stories, of somewhat autobiographical reflections. A former boxer and Viet Nam veteran, among other things. The stories are real and raw. From the flap:

“Jones’s stories -whether set in the combat zones of Vietnam or the brittle social milieu of an elite new England college, whether recounting the poignant last battles of an alcoholic ex-fighter or the visions of an American wandering lost in Bombay in the aftermath of an epileptic fugue-are fueled by an almost brutal vision of the human condition, in a world without mercy or redemption. Physically battered, soul sick, and morally exhausted, Jones’s characters are yet unable to concede defeat: his stories are infused with the improbable grace of the spirit that ought to collapse, but cannot.”

This sounds like a light-hearted, happy, optimistic book that will pick you right up when you’re feeling low. The author sounds like quite the phenom, though:

Thom Jones made his literary debut in The New Yorker in 1991. Within six months his stories appeared in Harper’s, Esquire, Mirabella, Story, Buzz, and in The New Yorker twice more. “The Pugilist at Rest” – the title story from this stunning collection – took first place in Prize Stories 1993: The O. Henry Awards and was selected for inclusion in Best American Short Stories 1992.

If stories were drinks, Jones’ would not be those little froo-froo drinks with paper umbrellas and fruit in them, they’d be straight shots from a bottle you keep in the bottom drawer of a battered old desk.

Gentle reader, I myself read The Pugilist At Rest almost thirty years ago because an editorial assistant at Harper’s recommended I do.

As you might know, gentle reader, I was very cocky as a young writer; I was submitting poetry, short stories, and essays to the slicks, the big New York markets, all throughout college. I was writing a bunch in those pre-blog days, with new stuff weekly to submit (instead of working on actual college papers, gentle reader). I would send each new thing I wrote with only a light revision (maybe) to Harper’s, The New Yorker, and The Atlantic Monthly, and maybe Playboy. After getting rejected by the heavy hitters, I would start aiming lower with literary magazines and whatnot.

When I sent a story about a man and woman pickpocketing team–lovers, but the man was having doubts–called “Nikki’s Victims” to Harper’s, I got a level 2 rejection:

The level 1 rejection is a form letter; level 2 is the form letter with a personal note; level 3 is a personal note/letter not on the form. So this editorial assistant thought that the style of “Nikki’s Victims” was good and that the fiction editor might like something else I wrote. I immediately sent “Flight”, a story about a young man who leaves town when his girlfriend announces her pregnancy.

The editorial assistant told me I should read Thom Jones.

So I did. I had to order it from the Waldenbooks in the mall. When I picked it up, I was telling my friend Doug that someone at Harper’s recommended it, and I was getting an anthology that my fiction professor had edited at the same time, so I convinced the clerk that I was a Writer, and he always was impressed with me when I went into the bookstore or when I saw him at the bus stop after that.

As to Harper’s, whatever I sent after “Flight” must have disimpressed the editorial assistant, as she never sent me another note and the next rejection I got was signed by someone else, so she’d passed me off for the final kiss-off.

So that’s as close as I ever got to The Big Time. Back in those days, as I said, I was able to knock out short stories, essays, and poems very easily. Now, I’m happy when I get around to finishing anything I start. Hey, I wrote an article that I’m going to publish for free on LinkedIn! Woo! I started this blog to get back into the habit of writing every day–and it’s about the only writing I do.

Although looking back at the stories I wrote in that period–I opened a couple to make sure I got the titles right, and I was wrong on one–makes me want to revisit them. Perhaps collect them into a book I can self-publish so that I can put them on my shelf if nothing else. Kind of like those things you see in the upper right corner of this page. Maybe I would even do better in the Writer’s Digest Self-Published Books contest.

As for Thom Jones, I didn’t think he was all that. I mean, a lot of the stories were very similar in theme and in voice. Everyone sounded like ex-military who loved and quoted Schopenhauer. I might have another book of his floating around here somewhere, but it doesn’t have as good of a story affixed to it.

Wait a minute, Brian J., you can put your hands on every rejection letter you got between 1988 and 2014? C’mon, man, of course I can. Nowadays, though, a lot of it goes through email or submission portals on the Internet, and those are not as fun to collect into a scrapbook of failure. 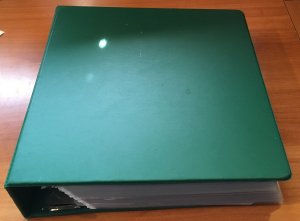 (Oh, lest I forget, the title again alludes to Robert Clark Young’s essay "One Writer’s Big Innings" which I read around the same time and which, clearly, has made a bigger impression on me than The Pugilist At Rest.)