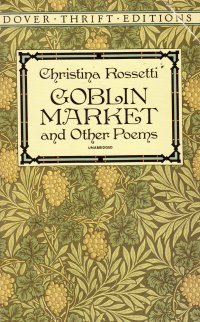 At any rate, I didn’t read it probably because it had two sisters and goblins in it, and it was long. But almost thirty years later, I picked this collection up in between the complete works of Keats and Shelley that I have intermittently been working on for years and the Marvell collection I picked up after reading the Milton recently (see this and this). You know what? I might have a new top five favorite (my beautiful wife, Edna St. Vincent Millay, and Robert Frost pretty much have locked up the top three spots, so other poets can only fight for #4 and #5 in the top five).

The language of the early-to-mid nineteenth century is much fresher and easier to read than the seventeenth century Milton and Marvell and the eighteenth century Keats and Shelley–although Rossetti does drop the occasional ye. Rossetti’s poems are lyric in rhythm, easily end-rhymed, and in most cases relatively short (which is not to be overlooked in a poem–I like mine easily digested and not something I have to put a bookmark in). Thematically, she talks about death and lost love a lot–so a proto-Goth poetess, but with talent–and she also talks about Christian faith. Sometimes, the poems focused squarely upon faith are reminiscient of grandmother poetry, but a cut above it, of course.

Although Rossetti’s first published collection was also called Goblin Market and Other Poems, the back cover indicates this is a new collection of her most famous works, of which “Goblin Market” is the most famous (at least, it’s the one that was assigned in college in the late 20th century).

Fun fact: Rossetti was working on these poems at the same time that William Edward Williams was working in London. Given that it was one of the largest, if not the largest, city in the world at the time, the odds are pretty good they never met.

So I enjoyed this collection more unabashedly and thoroughly than I had a collection of poetry (excepting my own, perhaps) in a long time (which is partially my fault as I read a bunch of poetry chapbooks and grandmother poetry as well as the aforementioned old poems which are at a remove from me given their language). If I had read “Goblin Market” when I was supposed to, perhaps Rossetti would have been one of my favorites for a long time. However, perhaps I am getting to read this at the right time, when I need new poetry for enjoyment and inspiration as my doggerel revival arises.