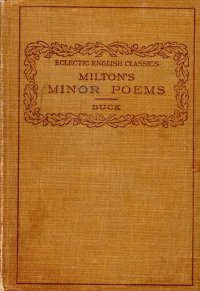 This book collects four pieces from Milton which do not have Paradise in the title and are not about his blindness. “L’Allegro” presents life as a person with a happy outlook. “Il Penseroso” presents life from a melancholy outlook. “Comus: A Masque” is a brief verse play wherein the sorceror child of Circe and Bacchus tries to tempt a virtuous woman to give up her life of chastity and to enjoy natural, sensual delights. And “Lycidas” is an elegy for a drowned companion that detours into political commentary that diminishes its impact.

It’s less than a 100 pages, these four works sandwiched with a pair of essays about Milton, his time, and his relationship to the Revolution at the time.

To modern readers, even to me a bit, the poems are a bit long-winded and slow without the punchiness that I prefer in shorter modern poems. However, to someone who’s steeped in older poems, though, they read pretty well and have a lot of nice little turns of phrase. Of course, my college poetry professor would point out that I shouldn’t write poems like this–as I did early in college. But I got more punchy.

And these weren’t onerous to read–like some of the wordy, wordy Romantic poet works. So a pleasant way to spend a couple of hours.

These little hardback editions from around the turn of the century seem to have been fairly common–in addition to this volume, I have a couple of works from Alexander Pope in similar editions from similar series. This series, the Eclectic English Classics, look to have cost twenty cents. I wonder if they were the Walter J. Black books of the day.

And I will probably read one of the Pope books–I since I just bought Essay on Man at the last book sale, it’s right on top–before I finish my complete works of Keats and Shelley. Or the Shakespeare I started years ago. Because these little books are Classics, and they’re not daunting. Which was probably their appeal a hundred plus years ago as well. It’s only the reading public that has changed.