I went to an orthopedist yesterday. I was all splinted up with a new bandage which kept the finger and the hand mostly immobile. The assistant brought me into a room, asked some check-in questions, and then pulled up the x-rays from my trip to the clinic last week.

Because I had been removing the splint for showering and a bit of hand-washing, they had me unwrap the splint for the exam. The swelling is down and the color is getting back to normal, the constriction of the bandage notwithstanding.

The doctor took a look at the x-ray, and he said, “I’ve never seen anything like that, not even in the books.”

Ladies and gentlemen, I present to you, the Noggle Dislocation. 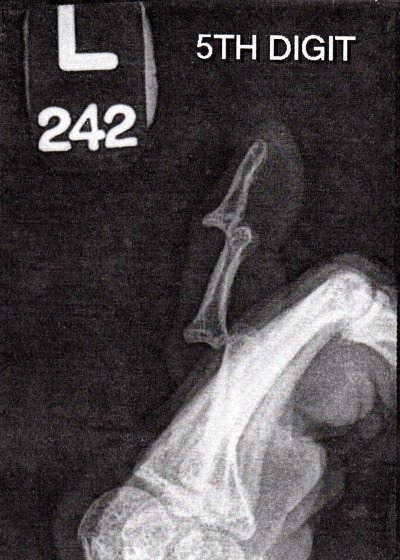 I must have taken that pass right on the tip of the finger.

The treatment? Well, I could buddy tape it to my ring finger, or I could have a custom orthotic created for me right there in the office (through another medical unit that was just colocated in the office for convenience, so I had to check in and answer the Current Unpleasantness questions for a third time in thirty minutes).

So I went for the latter, and the tech in there warmed cut a small piece of plastic, warmed it up in what might have been a retread of the old injection-molded plastic souvenir statue machines (called Mold-O-Matics, as Dave Barry reminded us). She warmed up the bit of plastic, curved it around my finger, and then wrapped a strip of Velcro around it. 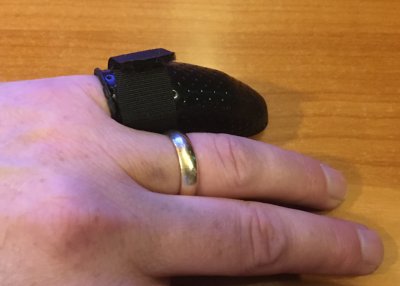 I am positive that it cost more than four quarters. I am almost afraid to see how much it cost, because I will inevitably speculate that I could have done it myself.

I told her that it completed my movie villain henchman ensemble.

I also have quipped that I wanted to opt for the one with the laser, but my insurance doesn’t cover it.

So I don’t have to wear the full splint any more. This one is designed to let me bend the finger forward to stretch everything out but to keep me from bending it backward (or evening straightening it out). The doctor said something that sounded like there was a chance that I would not get full mobility back, so I blanched, but then I decided even if that’s what he meant, I would not believe it. Although I might avoid breaking boards with the left knife hand in the future, I fully expect to throw a jab sometime in the coming months. Also, I am not saying I have been missing a lot of martial arts classes this year, but I did just check the internet to make sure I meant to say knife hand and not ridge hand. I have broken two boards with a right knife hand before, but I’ve never tried a ridge hand because I’m afraid I would hit my thumb. Not that I am scheduled to break boards any time soon. Although it has been over a year since my second degree test, I have yet to do a six month confirmation test, of which I need four to test and break boards again.

At any rate, when I saw my twelve-year-old, who threw the football, I was adopted a mournful air and told him that I’d been to the orthopedic surgeon and that I’d lost the finger and got a plastic prosthetic. Unfortunately, and fortunately, he is finally getting sophisticated enough that I cannot pull such tricks on him.

So I’m on the mend, mendier than I was yesterday afternoon. And, unfortunately and fortunately, I am no longer able to claim disability when it comes to the household chores.