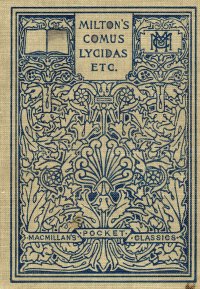 I said when I reported on Milton’s Minor Poems:

These little hardback editions from around the turn of the century seem to have been fairly common–in addition to this volume, I have a couple of works from Alexander Pope in similar editions from similar series. This series, the Eclectic English Classics, look to have cost twenty cents. I wonder if they were the Walter J. Black books of the day.

So I was looking for a science fiction paperback this week on three of my to-read shelves, and I came across this book. A small collection of Milton’s poems from the last years of the nineteenth century still in print in the early years of the twentieth century but from a different collection than the previous one I reviewed. Still, for a couple of dimes, you could have a small hardback that would last at least a century (not that you would have known it). I wonder how popular these were as textbooks–each had some pencil notations in various places, but there’s no telling whether it’s from the original owners or succeeding generations that might have used them as inexpensive textbooks. Heaven knows I did, when I was not checking my English and Philosophy primary sources out from the library.

At any rate, this book contains the same four pieces as Milton’s Minor Poems (“L’Allegro”, “Il Penseroso”, “Comus”, and “Lycidas”) as well as a few others (At a Solumn Music”, “On Shakespeare”, “Arcades”, “On His Blindness”, and “On His Deceased Wife”). The introductory essay is different, of course, and the book includes the Matthew Arnold address I have previously quoted (here and here).

I didn’t re-read the four pieces I read last month; however, I did read the new bits (although I used “On His Blindness” as one of our coronacation family poems, so I had been exposed to it pretty recently).

I don’t have anything really to add to my previous appreciation of Milton; although he gets a pile of accolades from a pile of poets since, including Matthew Arnold, I find him a little longform for my current tastes, although reading a bunch of him in a row will dial me into the language and form than coming into it cold. So these short books are good intros into it before you decide you want to jump into Paradise Lost.

Not that I will anytime soon; I shall probably read some of the Pope poems I have in these editions first.