Ah, 2020. What a year. I was gainfully employed for much of it and housebound, which meant I comfort purchased CDs at an astounding clip. My musical balance post from May indicates covered nine months and included 18 albums and three MP3 singles. Before I start tabulating the results in real time here as I write the post, I’m going to have to take the “over” bet.

Well, tuck it, I don’t know if any of you are interested in these posts, so I will once again abuse the below-the-fold feature.

Since I ordered The Birth of the Cool on May 25, I have gotten:

I’ve been ordering from the artists’ Web sites wherever possible as you can often get signed CDs or thank you notes from the artists, and I assume that the artist gets a bigger cut of it than if I order from Amazon. But I might be naive in that regard.

So how’s the balance? Of 30 albums (I am glad I took the over), we have 8 metal and 22 jazz songbirds or instrumentalists. Clearly, I was more in the mood to be mellowed and soothed than to amp up. We also have a single single (David Gilmour); that will likely change as I have some Amazon credit. Maybe I will use the credits to pick up a discounted or free digital copy of the new Amaranthe album or the newest Semblant album.

However, I am in a belt-tightened mode where I’m laying off of the impulse purchases of CDs for the nonce, so the next posting in this series might be far in the future, or it might be in a couple of months if I land some fuller time work and feel flush again. I know, poor little unfortunate me, but if I don’t purchase an artist that I discover and that I like right away, I forget about that artist (what a blessing to have so many good artists presented to me!).

For example, I recently heard on WSIE a jazz flutist from Kansas City who cited Herbie Mann as an influence. You see, I hear the song, I search the Web, I read the Web site, I impulse order or not, and then I move on. In this case, the artist has an album forthcoming but not out yet, so I didn’t order (also, I am being pseudofrugal). And then I forgot the artist’s name. I was telling my beautiful wife about her, but all I could remember was that she had a middle nickname that was something like McFlutealicious or something.

It’s only because I remembered those keywords jazz flute kansas city that I was able to find her: Amber "Flutienastiness" Underwood.

This is not Amber Flutienastiness: 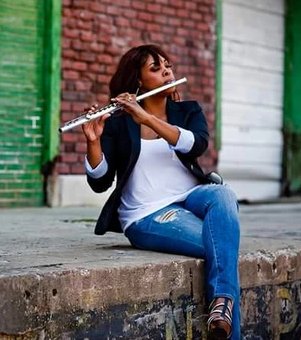 I know, I know; it’s my own typo (flutenastiness versus flutienastiness) that spurred the images of some other Amber (I assume). But I thought it would be a humorous throwback to the wrong Naz post.

Properly spelling it in the search reveals that she made her new album available on Bandcamp probably after the first time I researched her. It’s only $7, but I… am… acting… with… fiscal… restraint….

Join us next time for these riveting tales of my conspicuous consumerism to find out how soon it will be before I buy it.