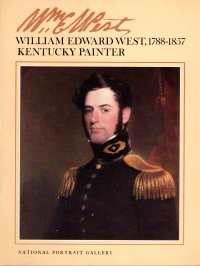 This book is a little text-heavy for reading during football games, but I started out browsing it last Sunday and finished it late last week in the reading chair.

The heavy text tells the biography of the artist, William Edward West, a portrait painter born in Kentucky but who lived amongst friends in Natchez, Mississippi, for a while, traveled to Europe for a long time, including Italy and London, and then returned stateside and spent time in New York and later Baltimore in the late eighteenth and early nineteenth centuries.

The artist was from a well-to-do family in Lexington, Kentucky, which was apparently a hopping place arouns the turn of the nineteenth century. He lived from 1788 to 1857, so the period between the first two civil wars (I kid, I kid–but it’s gallows humor). He made his living apparently by attaching himself to wealthy families, staying with them or in their orbits, and enjoying their society while painting their portraits. Portraitist is a particularly mercenary form of artist, after all–much of their work was for-hire, so one cannot come down on this fellow too much for schmoozing.

He made himself when he was traveling in Italy and got to paint a portrait of Lord Byron, one of the last before he went of to Greece and died. So he used that story to unlock doors in European and British society.

Many of the portraits in the book come from wealthy people of the period, so it’s not like you will recognize any of the names except for Lord Byron and a pre-Confederacy young Robert E. Lee, whose painting is on the cover (which probably means I should BURN THIS BOOK for JUSTICE!). The book only contains a couple of non-portrait works: A maritime picture which supposedly shows Lord Byron rowing out to visit the USS Constitution and a couple of group settings with stories to them.

The works are well-executed, although steeping myself in 20th century works from time to time means I’ll be impressed with the works of art school drop-outs from the eighteenth century. I enjoyed the book, although I am not sure how long I will remember William Edward West’s name. In the 21st century, it’s not likely to come up, even in trivia nights, should such things ever happen again.